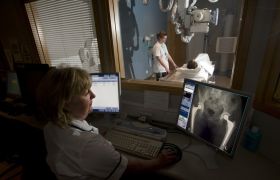 Surgeons at Glasgow’s Southern General Hospital are collaborating with Scientists at the University of Glasgow to develop a new type of orthopaedic implant which could be considerably stronger and more long-lived than the current generation of products.

Currently, implants are commonly made from materials such as titanium or ceramic and have a limited lifespan, requiring replacement after 15 or 20 years of use. In hip replacement surgery, the head of the thigh bone is removed and replaced with an implant which is held in place by a rod fixed inside the marrow along the length of the bone.

Marrow is a rich source of mesenchymal stem cells, which have the potential to divide, or ‘differentiate’, into other types of cells such as skin, muscle or bone which can improve the process of healing. However, stem cells can also differentiate into cells which have no use in therapy. Artificially controlling the final outcome to ensure the desired type of cells are created is very difficult, even under laboratory conditions.

When traditional implants are fixed into bone marrow, the marrow’s stem cells do not receive messages from the body to differentiate into bone cells, which would help create a stronger bond between the implant and the bone. Instead, they usually differentiate into a buildup of soft tissue which, combined with the natural loss of bone density which occurs as people age, can weaken the bond between the implant and the body.

The team, from the University of Glasgow’s Colleges of Science and Engineering and Medical, Veterinary and Life Sciences, have found a reliable method to encourage bone cell growth around a new type of implant. The implant will be made of an advanced plastic known as PEEK, which is already commonly used in spinal orthopaedic procedures.

Dominic Meek, Consultant in Orthopaedics and Trauma Surgery at Glasgow’s Southern General Hospital, has been participating in the development of the new implant.

He said: “I originally began working with Dr Dalby and Dr Gadegaard to supply samples of bone marrow stem cells for their research but it quickly became clear that their work had a lot of potential for direct applications in my area of surgery.

“We’ve been working closely together ever since and we’ve created an enthusiasm for orthopaedic research in the west of Scotland which has been missing for 15 years or more. Four postgraduate students have completed MDs or PhDs related to the subject and we currently have a team of six students, clinical fellows and post-doctoral researchers focusing on this new innovation.

“It’s an extremely exciting project to be working on, with implications for improving a wide range of joint replacement surgeries. We’re keen to see a prototype ready for use in hip replacement surgery within three years.”

Dr Matthew Dalby, of the University’s Institute of Molecular, Cell and Systems Biology, explained: “Last year, we developed a plastic surface which allowed a level of control over stem cell differentiation which was previously impossible. The surface, created at the University’s James Watt Nanofabrication Centre, is covered in tiny pits 120 nanometres across. When stem cells are placed onto the surface, they grow and spread across the pits in a way which ensures they differentiate into therapeutically useful cells.

“By covering the PEEK implant in this surface, we can ensure that the mesenchymal stem cells differentiate into the bone cells. This will help the implant site repair itself much more effectively than has ever been possible before and could well mean that implants will last for the rest of patient’s life.”

The team is working with biomedical supplies manufacturer Invibio, which developed the PEEK material, to perfect the design of the implant.

Dr Nikolaj Gadegaard, Senior Lecturer in Biomedical Engineering at the University, explained: “One of the main selling points of PEEK is that it is very tough, has excellent stability and is very resistant to wear. However, the inertness of the material has made it difficult to use in implants before outside of spinal surgery. However, our nanopatterned surface will allow the plastic to interact with stem cells and enable an effective integration between the implant and the body for the first time.

“Another benefit of PEEK is that it matches the mechanical properties of our own bodies much better than current technology. While bone has a certain amount of flex to it, the use of inflexible titanium in implants results in loss of bone density because the bone is not exercised. The flexibility of PEEK is similar to that of bone, and will allow the implant to bend in a natural manner, significantly helping the process of bone regeneration.

“PEEK products can be made using the same standard injection-moulding technique which is used to create the vast majority of common plastic items. Although our nanopatterned surface is complex, the process of production is similar to what which makes Blu-Ray discs, which means that future mass-production of the implant is a very real possibility.”

The partnership between the University’s academics and surgeons at the Southern General is a result of the Glasgow Orthopaedic Research Initiative (GLORI). GLORI, formed in 2009, aims to foster collaboration between scientists and clinicians to turn novel materials research into the next generation of orthopaedic care.