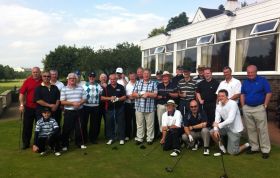 Prosthetic patients, family members and staff from WestMARC, (West of Scotland Mobility and Rehabilitation Centre), teed up to one another yesterday for the Centre’s first ever golf tournament, with patients winning on the day.

A total of 12 patients who attend WestMARC for support with their prosthetics, one family member and eight staff took part in the special event at Cowglen Golf Club.

David Morrison, WestMARC’s lead prosthetist, and one of the match organisers, said: “The day was about fun, but we also hope that it will inspire and encourage other prosthetic users that the loss or absence of a limb doesn’t have to hold them back from enjoying sporting activities.

“Keeping fit and socialising is an important part of a patient’s rehabilitation, and so we hope to make this an annual event.”

Steve Bramwell (52), from Johnstone is a Senior Information Analyst with NHS Greater Glasgow and Clyde and an active member of the Scottish Disability Golf Partnership (SDGP).

He lost his left leg below the knee in a motorcycle accident in 1979 and after wreck diving for a number of years decided to concentrate on golf, with some success.

In 2003 Steve spotted an advert at the Southern General for the amputee golf open at Westerwood Golf club near Cumbernauld, and since then has played for and captained the Scottish team at international disability tournaments.

He said: “After the accident I decided I was not going to sit at home and do nothing.

“When I stopped wreck diving I got together with a group of disabled golfers and now play regularly at my local club, Cochrane Castle, and play off a handicap of 19.

“People don’t consider me a disabled golfer, I’m just another member, and play with both disabled and able-bodied golfers.

“It’s a social outlet, good physically and also mentally, because you have to concentrate to keep track of your score.

Sainsburys’ store trainer Ian Robin (51) from Giffnock, was another one of the 12 patients who took part.

An upper limb amputee, Ian lost his left arm just below the elbow following a waterskiing accident at Loch Lomond in 1984.

He plays without any special attachments to his clubs and said: “I only started playing recently because a couple of my friends had had hip replacement operations and we reckoned we all needed some exercise.

“Golf appealed and we get our exercise from walking around the course and occasionally hitting a few good shots!”

Summing up his game, Ian joked: “Actually I’m a bit of a hacker!”

Sport plays a regular part in his life, a former rugby player, Ian is still involved with the game as a touchline judge for Glasgow Hutchesons Aloysians Rugby Club.

Notes to Editors:
WestMARC provides Rehabilitation Technology Services to six health board areas, from Islay down to Dumfries, catering for 52 per cent of the population in Scotland.

The service has a caseload of around 3000 prosthetic users and 45,000 wheelchair users and is staffed by several clinical groups, such as prosthetists, doctors,
bio-engineers, occupational therapists, and physiotherapists.

For further information or images either telephone 0141 201 4429 or email [email protected].