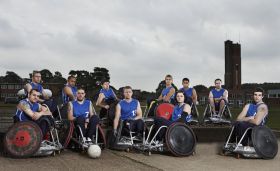 Michael Kerr, is Scotland’s hope for Paralympic greatness when he takes to the pitch with the GB squad in wheelchair rugby also known as Murderball because of its full on contact sport status – one of the main reasons he was first attracted him to this exciting sport which is described as  “a terrifying fusion of ice hockey, handball and rugby”.

“I like it because it is rough and tough,” laughs Michael who is the only Scot in the squad and the only representative from the Spinal Injuries Unit at the Southern General taking part in these home Paralympics.

He added:  “It’s just a massive honour to be selected for the squad.  We’ve been training flat out and it’s taken a long time and a lot of hard work to get but I’m enjoying being at the top of my game.”

Not only part of Team GB in the Paralympics, Michael also did his bit during the Olympics as an official touch bearer, carrying the flame in Toryglen.

Michael first began playing wheelchair rugby in 2001 following an accident on holiday in 2000 when he was just 17 years old.

He is the first to say that the spinal unit at the Southern General was his first inspiration as he came to terms with his accident and paralysis.

“The spinal unit has been a massive part of my life and it has been for so long.  I was just a baby at the time so I was really mollycoddled by all the nurses and staff.  It was hard but it was great in the unit and I needed to be there, it was the best place for me to be and I’ll never be able to repay for them for all that they did.”

And the staff at the spinal injury unit are very proud of Michael’s achievements.  Acting lead nurse - spinal injuries Michele Paterson said:  “He’s just a great guy, absolutely a real role model for some of the younger people we have in the unit.  It’s always good to see him when he comes to visit and we are so proud of him.  We are planning our own mini games in the unit to mark the launch of the Paralympics and hopefully inspire or find the next spinal unit paralympian!”

When he’s not in training, Michael does still visit the unit to talk to some of the younger patients coming to terms with the massive change to their life as a result of an accident or injury.  He’s also been involved in establishing a wheelchair rugby team in Glasgow which longer term he hopes to become more involved with perhaps taking up a coaching role.

“At the moment the team is just starting so they are so far behind where I am now that it’s not feasible for me to play with them but maybe after Rio who knows!”

Since being chosen for Team GB, Michael has been training even more intensively than ever and is pretty confident about the team’s medal prospects.  “If we keep playing the way we have and show all that we are capable of then I’m pretty sure we can get a medal, I don’t really mind what colour,” he laughs.

The team have had their last full on training session and are now preparing to head to the Olympic village and play their first game on 5 September against USA.

Wheelchair rugby is the most exciting of the paralympic sports as physical contact between wheelchairs is permitted and forms a major part of the game.  The game is fusion of ice hockey, handball and rugby founded in Canada in 1977, it is a combination of brute force and tactical strategy.  Eight rolling substitutes make up squads of 12, with four players on court per team at any time.  The aim is to thunder across your opponents' goal line with two wheels in contact with the hardwood floor and the ball in your hands. Players in possession have to bounce the ball or pass within 10 seconds of receiving it.