Olympic Showing For Our Football Stars 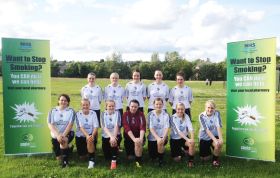 The Glasgow Girls Football Club under 17 team sponsored by NHS Greater Glasgow and Clyde smoking cessation team are set to be Olympic Stars in a new advert that will run during all the Olympic football games showing at Hampden.

The adverts will be beamed across the world demonstrating the skills of the team to a global audience.

Club organiser Jim Strathdee said: “We are delighted to be part of the Olympic Football games in this way, the U17 girls have amazing skills and to be able to showcase their talent like this is brilliant for us as a club. Even the camera guys who came to film the team train said they were much better than many of the boy’s teams they’ve seen.”

Glasgow Girls Football Club offers girls from as young as eight and nine years old the opportunity to take part in an active fun sport and compete in tournaments and friendlies across Scotland and the UK.

NHSGGC smoking cessation sponsors the under 17 team form the club. Many of the girls who play come from Shettleston which has one of the highest smoking rates in Europe.

None of the girls on the team smoke and it is girls of the team age that are being targeted by smokefree services not to smoke but instead take up a sport such as football and make sport and fitness part of an active, healthy lifestyle.

Public health pharmacist Liz Grant explained: “It just made sense to sponsor this fantastic team. We were so impressed with the work that Jim was doing to help girls in these poorer areas of Glasgow that was just about encouraging them to become active and about them learning to value their own self worth.

“It can be difficult for young women who often feel peer pressure not to take up smoking. When they are part of an active, healthy group such as the girls’ football team then it’s not the norm to smoke. They quickly realise the many benefits there are in not taking up the habit which is really what we want to encourage. Don’t start smoking and you’ll never have to stop!

“We are delighted that the team has the opportunity to shine during the Olympic Games and show off their many skills.”
Glasgow Girls Football Club is always looking for players for the under 9s, 11s, 13s, 15s, and 17s as well as players for the Women's team.

Anyone interested in joining can find out more at: www.glasgowgirlsfc.com