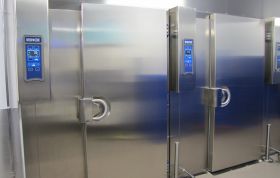 Hospital food in Greater Glasgow and Clyde has been revolutionised following a multi-million investment in catering services.

Over £10 million has been spent creating two new superkitchens which provide meals to every patient in every hospital in Greater Glasgow and Clyde. The new units are two of the most modern, state-of-the-art catering facilities in the UK.

The units at Inverclyde Royal Hospital (IRH) and the Royal Alexandra Hospital (RAH) both cook fresh produce which is then delivered within hours to hospital sites where other trained catering staff heat and serve the food ensuring consistent quality for hospital patients.

As well as meals for patients at the IRH and RAH, the units wil deliver meals to every other hospital site in the Greater Glasgow and Clyde area including the Southern General Hospital, Glasgow Royal Infirmary, the Victoria campus and the Vale of Leven Hospital.

Michael McCall, Catering Manager for the two units, said: “It is all about producing fresh, nutritious, healthy food, moving away from the traditional negative perception of hospital grub.

“The food is prepared at the two sites and divided into individual portions which are then frozen in huge blast freezers the size of a garden shed which preserves freshness and taste. The meals are then delivered to each of the 36 individual hospital sites where the food is reheated in hi-tech mobile ovens.

“We work closely with local catering managers to ensure that patient’s nutritional needs are being met and if patients indicate a particular food they like we do all we can to accommodate their request.”


Pic: Two of the huge blast freezers at the RAH.