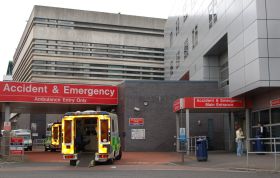 A unique survey by doctors has revealed an alarming rise in the number of young people needing emergency medical care after taking so-called “legal highs” at two of Scotland’s busiest A&E departments.

All were so seriously ill when brought in to the emergency trauma centres that they had to be admitted to hospital and in many cases only urgent specialist treatment prevented death.

Glasgow Royal Infirmary senior specialty doctor in emergency medicine Dr Richard Stevenson said: “When these patients arrive we can only treat the symptoms – because we don‘t know what they have taken… and neither do they. The symptoms are a very fast heartbeat, high blood pressure and muscles beginning to break down leading to a very high risk of having a stroke or heart attack. They also have very altered perception which can be very dangerous and makes it difficult to help or treat them.

“These legal highs cause an imbalance in the brain which overrides its usual pattern, the body temperature increases to 40 degrees there’s a risk of blood clotting, muscles dying and organs shutting down. None of the 37 cases admitted this year through the two A & Es have died … but no-one should be under any misapprehension that legal highs are potential killers. If this steep rise in admissions continue it is only a matter of time until we see deaths.”

Dr Stevenson said: “The main problem with legal highs is that you just don’t know what you are getting and these chemicals can interact very badly with prescribed medications – someone taking antidepressants could find it a lethal combination.

“Many of those patients we see and talk to do not regard themselves as “drug users” – they seem to think there is less risk with so-called legal highs which they regard as recreational drugs. The medical teams who treat them see all too often how dangerous and lethal these chemicals really are – the effects on the body are devastating.”

These chemical can also have a strong interaction with other drugs such as ecstasy and cocaine explained Dr Stevenson.

Dr Stevenson added: “We know 37 admissions in a year at two major hospitals may seem a relatively small number but our concern is that this is more than a fourfold increase in just 12 months and, in the cases we are seeing, the consequences are so severe.”

Notes to Editors
The RAH and GRI showed the largest numbers of admissions but statistics were also gathered at other NHSGGC hospital sites including Glasgow’s Western Infirmary, Inverclyde Royal Hospital and the Vale of Leven Hospital.

The figures in the release above relate purely to the GRI and RAH.