Parents encouraged to talk to your baby and listen too! 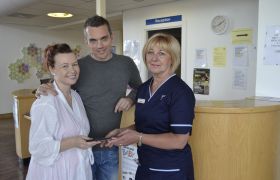 A new DVD encourages all expectant mums and dads to “Talk to Your Baby…and Listen Too” so they can appreciate the value of communicating effectively with their babies from pregnancy into early childhood.

NHS Greater Glasgow and Clyde speech and language therapist Liz Scott explained:  “Research shows that a baby begins to learn in the womb, and so we really want to make parents aware of this and encourage interaction prior to the birth.

This awareness should help to  improve attachment and interaction between mother and baby after the birth.  It means parents become pro-active at the earliest possible stage, feel involved with their baby, and begin building self confidence as parents.”

Liz runs ante-natal classes in both Glasgow Princess Royal Maternity and Southern General Maternity.  As well as encouraging early bonding between parents and baby, and giving advice as to how best to encourage good language skills,  the DVD is also helpful for parents who speak a language other than English at home, as it offers advice about bringing up their children to be successful bi/multi lingual speakers.

Liz added:  “There are enormous advantages in having children speak more than one language. They are likely to be intellectually more able than they would be if brought up speaking only one language, and will find learning another language later very much easier. In Glasgow alone, there are more than 125 languages being spoken in homes.

“We also know that language standards among pre-school children can be poor, often due to lack of stimulation at home, and that over 40% of children in Scotland are starting school without the language skills needed to access the primary one curriculum.

“A child’s brain develops more in the first three years of life than it ever does after that .Most of this development takes place in the first year. Language skills depend on the stimulation and communication offered by parents.

“Effective language skills are the building blocks on which later literacy and numeracy development is based.  By giving parents information at an early stage about talking effectively with their baby, we hope to increase their ability, interest and confidence in promoting their children’s language skills.”

Will Linden from Strathclyde Police’s Violent Reduction Unit who attended the launch said:  “Good communication and language skills are some of the main building blocks from which we learn; it allows us to develop relationships, express ourselves, work together and resolve conflicts. However, let’s be clear, parents have one of the hardest jobs in the world and it is our responsibility to help them and work with them to improve their and every child’s outcome.”

The “Talk to Your Baby” DVD will be given to all mums at 28 weeks gestation. It is in English, but can be viewed with a Punjabi and also a Cantonese translation. DVDs can also be made available to social workers and health visitors to assist parents with learning difficulties or particular needs.