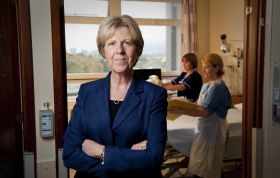 Rosslyn has been a long time supporter of GCU’s nursing students and in a distinguished and varied career that has included roles as a district nurse, a midwife and a health visitor, she will bring a wealth of experience and unrivalled insight as an Honorary Professor.

“NHS Greater Glasgow and Clyde has a long association with GCU and I am looking forward to further cementing that relationship by contributing to the Universities excellent opportunities for nurses and allied professionals.”

Pro Vice Chancellor and Executive Dean of Health and Life Sciences, Professor Veronica James, who worked as a Practice Nurse before joining GCU last year, said: “I am thrilled that Rosslyn will be bringing her wealth of clinical and organizational experience to share with our undergraduate, postgraduate, doctoral students and researchers. I greatly look forward to us working together to develop safe, modern health teams who engage with the challenges of community and hospital care in the times ahead.”

Notes to Editors
Rosslyn trained as a registered nurse at the Victoria Infirmary in Glasgow, after which she qualified as a district nurse and practiced in many areas in South Glasgow. A change of direction followed with a move to Ayrshire and Arran to study as a midwife. Rosslyn then returned to Glasgow as a district nurse for a short time before a career break to have her children.

On returning to work, after a variety of part-time positions, Rosslyn trained as a health visitor in Glasgow, then moved to Argyll and Clyde Health Board where she held a number of promoted posts and completed a degree in Health Studies and Management.