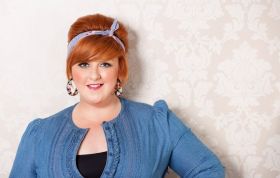 Michelle McManus gave her support to a special event at the Burrell Museum today.

The event was a positive celebration of women with a drama production, some short films being shown, information stalls, tours of the Burrell, workshops and pampering sessions including massage and beauty therapies.

The event was organised to raise awareness of gender based violence issues among women and Michelle kindly gave up her time to open the event.

Alan Gilmour, Planning Manager within the South Sector of the Glasgow Community Health Partnership, said: “In the South of Glasgow and across the city there was a programme of planned action to highlight the devastating effects of violence against women as part of the 16 Days of Action Campaign.

“This event follows on from work done during the campaign and brought together a range of groups who work with vulnerable women as well as women and their families who are affected by these issues.

“The event was a positive celebration of women and we are grateful that Michelle agreed to support us once again by kicking the event off.

“We were also delighted that solo singer, Carol Laula, performed at the event so there was plenty going on throughout the day.”