Libyans to Return Home After Treatment 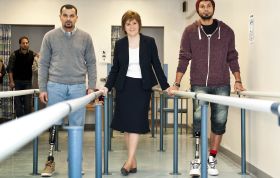 Libyan civilian war victims are getting ready to return to their country after receiving specialist prosthetics treatment by the NHS in Scotland.

The men, who were injured in the war in Libya and all required prosthetics, arrived in Scotland in January for treatment at WESTMARC prosthetics centre at the Southern General Hospital in Glasgow.

Today Health Secretary Nicola Sturgeon met with some of the patients to hear their stories and to see the progress which has been made since they arrived in Scotland.

Speaking at WESTMARC prosthetics centre, Ms Sturgeon said: “Scotland offers excellent specialised prosthetics care, and it is right that we were able to offer this quality of care to others who urgently needed it.

“I was delighted to meet the Libyan patients today, to see first hand how our specialised skills have benefited those who were most at need.

“All of the patients suffered lower limb amputations and one is a bilateral amputee, and they will be returning home to Libya having received the life-changing prostheses and support they required.”

John Colvin, WESTMARC Consultant Clinical Scientist, said: “The whole WESTMARC team are delighted to have had the opportunity to help this inspiring group of patients. It is very difficult for us to fully appreciate what they have been through and their personal stories have been very moving.

“They have worked hard and shown great determination in adjusting to their new prosthetic limbs and we wish them every success in the future.”

Among the Libyan casualties is Abdulminum El-Zair, from BeniWalid, who works as a driver for a power company.

His brother (Abdulsalam) was killed by Gaddafi forces while demonstrating against Gaddafi leadership.

Abdulminum, 34, said: “At that point I decided to join the battle to liberate BeniWalid.

“I was hit with a rocket in September. A lot of people died that day and my uncle died a few days later. I lost my right leg but I would have given my life to liberate Libya from Gaddafi and his regime.

“Now we are looking to build a new democratic country. I am looking forward to going back and help in rebuilding my country. I miss my parents, brothers and sisters.

“I cannot thank the Scottish people enough for allowing me to come here for treatment, I have been overwhelmed by the kindness shown to us and the support from the medical and nursing staff and also the local community.

“I would also like to thank the Libyan Government for choosing Scotland as the country for my treatment. I am looking forward to a new prosperous relationship between Libya and Scotland and to sharing my experience here with the people back home.”

29-year-old Ehab Elmehdawi, from Benghazi was jailed with his brother after a demonstration against the Libyan Government in 2006.

His brother, Mansour, aged 26, was later killed in March last year, just a few hours before the UN enforced a no fly zone in the country.

Ehab, who is a university graduate and works for an electricity company, said: “I would like to return to work and help to rebuild a new Libya. I had never dreamt of visiting Scotland and since arriving here I have found the Scottish people very friendly and helpful.

“I cannot thank the Scottish Government and Ms Sturgeon enough for their help with our treatment and the staff at the treatment centre for all the help and support they have given us.”

The men are part of a group of nine Libyan prosthetic patients who are receiving specialist prosthetics and support in Scotland. Across the UK there are 65 Libyan patients receiving treatment.

They will be returning to Libya over the next few weeks once their treatment is complete. All costs are being met by the Libyan authorities.