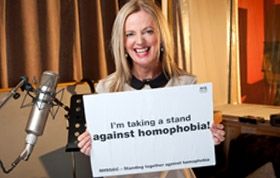 Launched by NHS Greater Glasgow and Clyde (NHSGGC) the “Standing together against homophobia” campaign is the first of its kind in the UK NHS.

Stark statistics have revealed the extent of homophobia that pervades Scottish society:
• one in four LGB people have experienced homophobia from NHS staff in Scotland
• one in three homeless people in Glasgow are driven out of their homes because of their sexuality or homophobia
• four in five young gay people in Glasgow and Clyde have experienced discrimination
• two in five primary school teachers witness homophobic bullying.

In the face of these appalling figures, Scotland’s largest Health Board has launched the zero tolerance campaign to highlight that it treats homophobic attitudes and behaviour by its staff, patients or visitors as seriously as racism and sexism or any other type of discrimination.

The campaign has already got off to a flying start with support having already come from Scottish sporting and TV stars, politicians, the music industry and the literary world.

Sue Laughlin, NHSGGC, Head of Equality, said: “We know that people experiencing discrimination on the grounds of their sexuality have poorer health and that their recovery from health problems can be adversely affected. Fear of being discriminated against can actually be a very serious barrier to people accessing healthcare.

“Similarly we know that our LGB staff also feel inhibited in coming out to colleagues because they don’t know what kind of reaction they might get.

“Our campaign is a very important step in changing attitudes amongst staff and patients and their families, to create a culture where people can be open about their sexual orientation for the good of their health and overall wellbeing.”

The groundbreaking campaign is photo led. The idea simple - members of the public or a member of staff can take a photo of themselves on their camera phone holding the A4 sign “I’m taking a stand against homophobia” (which is downloaded from the NHSGGC website) and then load it onto a dedicated website to show they back the campaign and that they are also "taking a stand against homophobia".

So far almost 1000 members of frontline NHSGGC doctors, nurses and other clinical and support staff have pledged their support to the campaign and they are now calling on members of the public to support them by uploading their own photo or clicking the pledge button on the website.

Dr Aileen Blower, Consultant Child and Adolescent Psychiatrist, said: “When I heard about the campaign I thought it was a fantastic idea and immediately decided to make the pledge. I am a lesbian and whilst I have not experienced any discrimination in the workplace personally just hearing about the campaign made me feel more confident. I have always been proud to work for the NHS but I feel even more proud to work for this health board since the launch of this very important campaign. It couldn’t be simpler to take part - all you need to do is download the A4 poster from the NHSGGC website, print it off, take a photo of yourself holding it and upload it onto the campaign website. Pledge made.”

If you would like to take a stand against homophobia, pledge your support to the campaign and join our gallery go to www.nhsggc.org.uk/homophobia.

Images of the celebrities who have backed the campaign holding the “I’m taking a stand against homophobia” slogan are available for publication and can be downloaded at www.nhsggc.org.uk/homophobiapressphotos