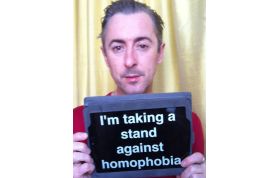 A major campaign to tackle homophobic attitudes in the NHS which has been backed by stars and celebrities from stage and screen has won a top award.

At a glittering awards ceremony last night the “Standing together against homophobia” campaign, launched by NHS Greater Glasgow and Clyde (NHSGGC), picked up the prestigious CIPR Scotland Pride Award for Public Sector Campaign of the Year.

It has also received more than 1200 online pledges of support from NHS staff and members of the public and more than 15,000 hits on its web page.

Scotland’s largest Health Board launched the zero tolerance campaign to highlight that it treats homophobic attitudes and behaviour by its staff, patients or visitors as seriously as racism and sexism or any other type of discrimination.

The campaign has also received the backing of leading agency Stonewall Scotland which works to achieve equality and justice for lesbian, gay, bisexual and transgender people.

Ally McLaws, NHSGGC Director of Communications, said: “This is a tremendous accolade for the campaign which attracted tremendous support from staff, patients and public including a host of celebrities from stage and screen.

“The campaign’s success lies in the strength of the statements made by those staff and patients who were bold enough to talk about the homophobia that exists in the NHS and wider community today.

“Standing Together Against Homophobia is a very important step in changing attitudes amongst staff and patients and their families, to create a culture where people can be open about their sexual orientation for the good of their health and overall wellbeing. It is our sincere wish that this campaign may have gone some way to addressing this issue.”

Laura Sutherland, Chair of the CIPR Scotland, said: “Scotland can boast success amongst the plethora of consummate professionals in the communications world – this is a true accolade in itself and one to be celebrated and applauded. As the industry develops, more and more we are being held accountable for value, measurement and best practice. Tonight’s awards have confirmed the wealth of talent in Scottish communications.”

The groundbreaking campaign is photo led. The idea simple - members of the public or a member of staff can take a photo of themselves on their camera phone holding the A4 sign “I’m taking a stand against homophobia” (which is downloaded from the NHSGGC website) and then load it onto a dedicated website to show they back the campaign and that they are also "taking a stand against homophobia".

If you would like to take a stand against homophobia, pledge your support to the campaign and join our gallery go to www.nhsggc.org.uk/homophobia.