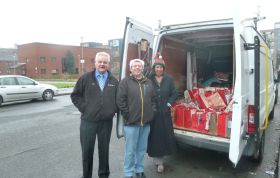 NHS staff and the building contractors at the new South Glasgow Hospital have brought joy to the people of Govan.

Staff from the hospital project and Brookfield Multiplex, the main building contractor of the new hospital, pulled together by donating food and Christmas gifts to offer some festive cheer to the local community.

The Christmas gifts were donated to the Preshal Trust, a local charity which supports local families and children in the area.

Shirley McKnight, Depute Director, Elderpark Housing Association, said: “We have already distributed the parcels to 50 of our oldest tenants who live alone and the feedback from them has been overwhelming. They have all been surprised and delighted. The Association would like to give a big THANK YOU to all at NHS and Brookfield Multiplex for this fantastic gesture.”

Alan Seabourne, Project Manager, NHS Greater Glasgow and Clyde, said: “The staff at the new hospital’s project team and Brookfield Multiplex work closely with the community and wanted to do something on the run up to Christmas. By donating food and presents they hope to bring a little bit of festive cheer.

“Both the NHS staff and Brookfield Multiplex have been amazing with their donations which has allowed 112 food parcels to be handed out to older people who hopefully will enjoy some nice treats. The Christmas gifts that were donated will be distributed to children locally which will hopefully make a difference this Christmas.

Caron Dunlop,Community Engagement Manager, Brookfield Multiplex, said: “The Christmas collections are part of our on-going community involvement at the site and it is fantastic that everyone has pulled together with the hampers and the gifts for the young people.

“This is partnership working at its very best and it is great to see the positive impact on the local community.”