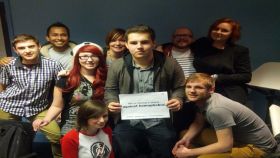 Students from University of the West of Scotland Student’s Association have joined a host of celebrities backing the NHS Greater Glasgow and Clyde’s campaign to tackle homophobic attitudes in the NHS.

More than 200 students joined the homophobia campaign at various events organised for Fresher’s week in campuses in Paisley, Hamilton and Ayr.

"Standing together against homophobia" is the first campaign is the first of its kind in the UK NHS. Scotland’s largest Health Board launched the zero tolerance campaign to highlight that it treats homophobic attitudes and behaviour by its staff, patients or visitors as seriously as racism and sexism or any other type of discrimination.

Stark statistics have revealed the extent of homophobia that pervades Scottish society:
• one in four LGB people have experienced homophobia from NHS staff in Scotland
• one in three homeless people in Glasgow are driven out of their homes because of their sexuality or homophobia
• four in five young gay people in Glasgow and Clyde have experienced discrimination
• two in five primary school teachers witness homophobic bullying.

NHSGGC Head of Equality Sue Laughlin said: "We know that people experiencing discrimination on the grounds of their sexuality have poorer health and that their recovery from health problems can be adversely affected. Fear of being discriminated against can actually be a very serious barrier to people accessing healthcare.

"Our campaign is a very important step in changing attitudes amongst staff and patients and their families, to create a culture where people can be open about their sexual orientation for the good of their health and overall wellbeing."

President of the Student’s Association of the University of West of Scotland Garry Quigley said:

"The 'Stand Up Against Homophobia' was the key message that we were promoting throughout our Freshers' programme and managed to get over 200 students to sign up to the campaign, rejecting homophobia in whatever form it takes.

"The Students' Association prides itself on being a safe place for anyone to come to [email protected]@our services. We are proud to support this cause and will continue to campaign, in the hope that we [email protected] an increasingly more equal and tolerant society."

LGBTQ student president Jack Douglas added: "At the fayres new students are able to see what each group and service at SAUWS and UWS has to offer. SAUWS LGBTQ has always been more of a campaigning group rather than a social group so we thought this would be a great thing to do to engage with new first years to show what type of group we are.

"We know that being a new student can be quite nerve-wrecking from leaving your friends in secondary school to a large institution where everyone is a stranger. This is even more so for people who are LGBT as they don't know if they are going to be accepted by a whole new set of students. So we knew this would be a great way of showing new students that UWS is an inclusive organisation, regardless of your sexual orientation.

We also understand how the slightest bit of discrimination, whether this is direct or indirect, can have an impact on your mental health and is why we were so pleased that NHSGGC launched this campaign in the first place. When we figured out we had over 200 people who took a stand against homophobia we were both surprised and pleased how many [email protected] from UWS were willing not only to say no to homophobia but how they did this publicly and were willing to have it online for anyone to see."

The groundbreaking campaign is photo led. The idea simple - members of the public or a member of staff can take a photo of themselves on their camera phone holding the A4 sign "I’m taking a stand against homophobia" (which is downloaded from the NHSGGC website) and then load it onto a dedicated website to show they back the campaign and that they are also "taking a stand against homophobia".

If you would like to take a stand against homophobia, pledge your support to the campaign and join our gallery go to

You can also view pics of the student’s at Fresher’s week and of all our celebrity supporters as well as staff and members of the public who have been getting behind the campaign.