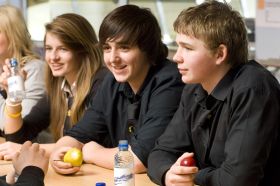 A youth group set up in East Renfrewshire Community Health and Care Partnership (CHCP) has won a Crofton award in recognition of its work to reduce the harm caused by tobacco.

The award was given to the Big ShoutER – a volunteer group set up by four local young people who identified that young people were not being involved in shaping services for young people and that there was a lack of understanding of their health needs.

The group worked with tobacco peer educators, WWEST and health topic specialists to develop Peer Education packs and to deliver peer education sessions about the harmful effects of tobacco to other young people both within school and in the community setting.

By delivering their messages in a fun and interactive way, the Big ShoutER has helped break down barriers to engage better with certain groups of young people such as those leaving care, young carers and young people with additional support needs. These groups are often difficult to engage with but by finding innovative and create ways to deliver their messages the group has been able to break down many barriers.

Following a session with the Big ShoutER, those attending the events said they felt more aware of their health and the effects of smoking on their family, pets and the environment. They added they were keen to encourage members of their community to attend both the youth and adult smoke free services.

The Crofton Award, which also includes a substantial £1000 prize, was presented to the Big ShoutER group at a special ceremony in Edinburgh. The group plan to spend the money on developing an interactive tobacco peer education resources for young people with additional support for those with more complex learning needs.

Emma Alford from The Big ShoutER group said: "It is an honour to be presented for this award as it highlights all our hard work over the past few years. The fact that we are being recognised nationwide only makes me wonder how far we can go as a peer education group after our success so far. When I joined the group last year, I never expected that something like this would happen. Being with the Big ShoutER has really boosted my confidence and skills and this award is just the tip of the iceberg."

Health Improvement Senior for children and young people, East Renfrewshire CHCP, Hazel-ann McWhirter said: "The young people in The Big ShoutER are a great example to others with their passion, creativity and commitment to the project as young [email protected] They work really hard to be the voice of their peers and to deliver unique health peer education sessions on health issues including [email protected] I am very proud of what they have achieved and everyone thoroughly deserves this recognition".

Tobacco is only one area, the Big ShoutER focuses on. The group is keen to influence positive change in the design and delivery of youth services in East Renfrewshire with the long term aim of improving young people’s health and wellbeing and reducing health inequalities.

It clearly shows that young people can make a positive contribution to their communities and demonstrates the benefits of health staff and young people working together on related topics.

The importance and influence of peer education has been shown to be one of the most effective methods of positively changing the attitudes of young people. The Big ShoutER focuses on giving young people a voice, on building confidence, self esteem and life skills around tobacco issues so they positively influence health change among young people and in the community.

The group concentrates on a number of health topics that young people themselves have identified as important to them through a youth health consultation. Other areas of concern for the group are sexual health and healthy weight.

The Crofton Award was launched by the Royal Environmental Health Institute of Scotland (REHIS) in partnership with ASH Scotland for the first time in 2009, to recognise the contributions young people in Scotland make towards reducing the harm caused by tobacco. The award is given at the REHIS Annual Awards ceremony held in November each year.

The award is named after Sir John Crofton and Lady Eileen, both prolific campaigners against the harm caused by tobacco.