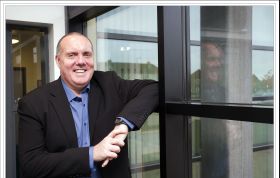 A nurse who leads by example and has played a major role in the further development of forensic mental health services in Glasgow has won a major award recognising his significant contribution to nursing.

Tommy Harrison, Senior Charge Nurse, at Rowanbank Clinic on the Stobhill Campus, has become a role model for patients and colleagues after championing developments in forensic medicine and developing new services to enhance outcomes for his patients.

Tommy was presented with his NHSGGC Chairman’s Award in the category of Nursing by Cabinet Secretary for Health, Alex Neil, at a special ceremony in Glasgow.

Some of Tommy’s achievements above and beyond his core responsibilities include; producing a major report reviewing equality services for forensic mental health services and developing a referral scheme with the Forestry Commission providing therapeutic activity and work skills which was recognised for a humanitarian award by the UK Public Health Association.

Tommy also organised a study of stigma involving staff and patients which became an academic paper.

He has also organised arts and film projects for the national mental health festival and helped to produce a film with the Scottish Government for carers and to top it off he also runs marathons for charity!

Receiving his much deserved award Tommy said: “What motivates me is to make the clinic a better place to be in for both patients and staff.

“I also like to do things which will push and really sell the service and try to be at the cutting edge of what we can do.

“For example we were the only in-patient service to take part in the Forestry Commission project ‘Branching Out’ and being out in the open positively changed the dynamics between patients and staff.”

One of his two nominees described Tommy as “an inspirational and highly respected nurse who goes above and beyond the call of duty for his patients and work colleagues.”

The nominator went on: “Tommy is always approachable and enthusiastic and exactly the type of person that you would want to care for you if you were experiencing mental illness and emotional distress.”

NHSGGC Chairman, Andrew Robertson, said: “It is clear that Tommy is a most dedicated nurse – going that extra mile for his patients on a regular basis.

“Tommy and his colleagues provide high quality care in a challenging environment.

“He is a wonderful ambassador for his patients – tackling the stigma associated with mental ill health on a daily basis. He displays many of the core qualities we expect in our nursing staff. Tommy is a credit to his profession and a very worth winner of this award.”