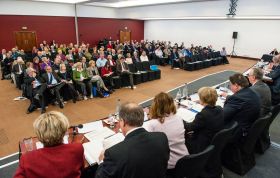 The review was chaired by the Cabinet Secretary for Health, Alex Neil.

The Board’s Senior Management Team reported significant achievements in meeting or exceeding the majority of its HEAT targets through which thousands of patients have benefited from earlier and more innovative treatment.

Robert Calderwood, NHSGGC’s Chief Executive, said: “Continuing to meet or exceed these tough targets, whilst at the same time maintaining a balanced budget, is particularly pleasing when viewed in the context that we treated some 280,000 inpatients, 160,000 day case patients, 1.2 million outpatients and 470,000 A&E attendances in 2011/12.”

Cabinet Secretary for Health, Alex Neil, said: “I have been very impressed by what I have heard and NHS Greater Glasgow and Clyde is doing very well in achieving their targets.

“I would like to thank the entire workforce for their commitment and hard work.

“I am delighted that so much progress has been made and look forward to another successful year in 2013/14.”

Mr Calderwood added: “When reviewing the performance, activity and progress made across NHSGGC during 2011/2012 I am struck by the enormous improvement in the quality of care and outcomes for patients that are being achieved today compared to ten years ago.

“I think it is outstanding that we have significantly exceeded some of our targets in tackling smoking, alcohol consumption and coronary heart disease.

“We were set a target of delivering 14,066 alcohol brief intervention this year to help people tackle harmful levels of drinking and we beat the target by more than 40 per cent – achieving a total of 19,886 interventions. We had another target to carry out 7,050 cardiovascular health checks by March 2012 but completed a total of 19,466 of these vital checks. In addition we also almost doubled our target of helping 6,762 people to quit smoking with total 12,129 residents successfully supported to kick the habit.

“A number of major strategic milestones have also been achieved this year such as the opening of the largest and most modern laboratory in the whole of Europe on the New £842 million Southern general Hospitals site, the start of construction work on the new £20million Vale of Leven Centre for Health and Care, the announcement of a further £40million investment in four new health centres, £7million investment in the new Inverclyde Langhill mental health clinic and the start of construction work on a new £10.5million development at Leverndale Hospital.

“I am immensely proud of the individual, team and organisational efforts of staff in achieving all this and so much more.”

Some of NHSGGC’s other key achievements include:
• Cancer waiting times continued to exceed the 95% target of patients beginning treatment within 31 days of decision to treat.
• Similarly we also exceeded the target of 95% of patients urgently referred with suspicion of cancer being seen within 62 days,
• By December 2011 we needed to meet a target of 90% of patients not waiting longer than 18 weeks from referral to treatment. By December 2011 90.2% of patients were being treated within this target and this performance has been maintained.
• 93.3%of our drug and alcohol clients wait no longer than three weeks from referral to treatment which exceeds the target of 90%.
• 1,134 children completed a health weight intervention programme to tackle childhood obesity, exceeding the target on 1,131.
• Progress in reducing rates of Clostridium difficile has been delivered beyond the target set for us and our performance continues to set the pace for boards across Scotland.
• We also achieved and exceeded the required reduction in levels of Staphylococcus aureus (including MRSA)

Some areas where NHSGGC is continually working to improve performance include A&E waiting times and admission to a stroke unit on the day of admission or the day following presentation.

Our A&E units are amongst the busiest in the county and see around half a million patients each year. We have been set a target of 98% of all A&E patients being seen within four hours and at March this year we were at 95 per cent. We are continually working to improve this perforce.

At March this year 73% of patients were admitted to a stroke unit on the day of admission or the day following presentation. The target is 80% and our acute division has improvement plans in place on all hospital sites to drive up this performance.

Notes to Editor
Images from today’s annual review are being sent direct to your picture desks by Young Media.