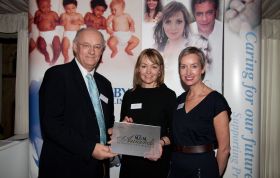 A team of spceailists at Glasgow’s Southern General Maternity have won a prestigious national award after being nominated by a grateful patient.

Little baby Beth owes her life to miracle workers at the Southern General Maternity Unit following the care gIven to her mum during a fraught pregnancy and birth.

Beth’s mum, Shona, nominated the team for a national MUM (Maternity Unit Miracles) Award after the care and attention she was given during her pregnancy with baby Beth.

Shona had previously suffered three miscarriages and was scared, nervous and ecstatic when she discovered she was pregnant again. However, the team at the Southern General Maternity Unit made sure Shona was well looked after with regular scans, appointments and reassurance.

Dr Judith Roberts, Consultant Obstetrician and Gynaecologist, and Cindy Horan, Specialist Midwife both attended the awards ceremony in London last week to accept the award on behald of the team.

Dr Roberts said: “We are extremely grateful to Shona for nominating the team for this national award.

“It is satisifying for us as health professionals when we can offer support and reassurance to someone who has experienced such a difficult time as Shona. We are all delighted that Shona has given birth to a beautiful, healthy, little girl and offer her and her family our best wishes for the future.”

Cindy added: "Stories like Shona's not only give other families hope and encouragement for the future but make our jobs as midwives and doctors all the more rewarding."

For further information or images either telephone 0141 201 4429 or email [email protected].


Notes to Editors
The Baby Lifeline MUM awards, were nationally launched in April 2012 by Baby Lifeline CEO and Founder Judy Ledger, who first started the charity more than 30 years ago to support Maternity Units, Mothers and Children, through equipment funding and specialist training. Parents from throughout the UK were invited to nominate teams whose performance they believe to be outstanding.