A Town of Heart Heroes 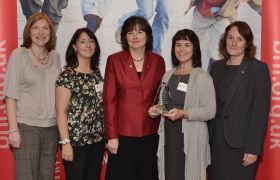 Paisley is a town of Heart Heroes according to the British Heart Foundation (BHF) Scotland which has recognised the Paisley Heart Town partnership for its fundraising efforts over the last year.

The Heart Hero award from BHF was presented to Renfrewshire Community Health Partnership, Renfrewshire Council, Engage Paisley and other partners involved in Paisley Heart Town at a special award ceremony in Glasgow last week and recognises is efforts in fund raising. In particular of those involved in organising the first inter-Heart Town cycle from Paisley to Falkirk earlier this year.

BHF Scotland Fundraising Volunteer Manager Carole Nicol said: "I am delighted that Paisley Heart Town is being recognised for making such a success of our partnership. As one of the first Heart Towns to be set up in the UK, Paisley is leading the way in making use of the fabulous BHF resources, providing new opportunities for the people of Paisley to keep active and also in its exceptional fundraising effort for the life-saving work of BHF Scotland."

One of the biggest fundraising events was through the BHF’s Great British Bag-a-thon collecting an incredible 251 bags of items which were sold from the BHF Scotland shop in Paisley High Street. The Heart Town partnership collected 200 bags from the council, 31 from Renfrewshire CHP and the local voluntary sector offered 20.

Business Development Co-ordinator at the BHF Kate Gutteridge said that council contribution alone could raise £4000 for the charity, helping to fund lifesaving research.

Renfrewshire CHCP head of planning and health improvement Fiona Mackay who is also chair of the Paisley Heart Town steering group said: "Paisley has a poor record of heart health. This initiative is a great opportunity for the partners to work together to improve Paisley's heart health and also to raise funds for BHF Scotland".