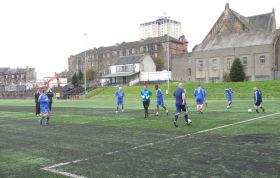 And “Tackling Recovery”, a joint venture between NHS Greater Glasgow and Clyde (NHSGGC), Queen’s Park Football Club and the Scottish FA has proved so popular it has been expanded to meet demand.

The programme has led to participants reporting high levels of improved self-esteem, decreased feelings of distress and improved physical fitness amongst people with mental health problems.

Its aim is to use football as a vehicle to aid recovery by giving participants the opportunity to socialise not only with football coaches and health workers, but also to meet other people with similar backgrounds and mental health issues.

The programme is run in 12-week blocks, under coaches from Queen’s Park, with support from NHSGGC mental health staff in nursing, occupational therapy, and physiotherapy.

The project was the first winner of NHSGGC’s overall Chairman’s award in 2010.

Repeated clinical outcome testing revealed that 67 per cent of the “players” reported improved self-esteem with a further 67 per cent saying that they experienced a decrease in presenting distress levels.

There was an impressive 76 per cent attendance rate and physical fitness testing demonstrated that 83 per cent of participants had improved timed sprints and 75 per cent showed an improvement in their peak flow lung capacity.

“This programme has demonstrated obvious health benefit to the players who took part.

“Additionally, and perhaps most importantly, each player set and achieved their own personal goals, which ranged from improving football skill, to losing weight, or just turning up and being a part of something.

“It is also important to recognise that this is a programme developed with mainstream sporting organisations which gives participants the opportunity to improve not only their mental and physical health, but also increase their vocational opportunities.”

David McArdle, Scottish FA Disability Development Officer, said: “The programme has been a huge success and the results have shown football can have a positive impact on people’s lives and make a huge difference to their wellbeing.”

“Since the conception and award winning pilot of what has become an established program within the Community remit at Queen’s Park, we are happy to report that progress is steady.

“The Tackling Recovery model uses football to help adults with mental health issues to kick start themselves on the road to recover lost self esteem, confidence, health and well being.

“Coming together at our Lesser Hampden training facility on a weekly basis and being part of a positive group intent on enjoying a twelve week block of fun, football, camaraderie and a coaching qualification thrown in for good measure continues to give positive results for all involved.

“With a continued pathway through the club’s adult football sessions, the development -importantly- goes forward beyond the initial block.

“Following the successful first run and as a result of demand, the program has doubled in size and there are plans for further expansion.

“As a Club, Queen’s Park FC are delighted to have played a part in helping to establish Tackling Recovery and look forward to the future with optimism.”