Scots Urged to Respect the Dying Wish of Their Loved Ones 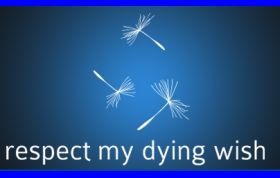 Every year in Scotland, 15% of potential organ donors are lost because their loved ones refuse their dying wish.

Last year in Scotland 43 people died while awaiting a transplant. All 43 might have had an extra chance of life if the wishes of just five people who had signed the organ donation register hadn’t been overturned by their family.

The fact is transplant teams will never take organs or tissue for transplant if the family says no, even if a person has already agreed to donate.

When someone dies it is taken for granted that those around them will respect their last Will and Testament. Yet people who take a conscious decision in life to sign up to become a donor are often denied their dying wish when their next of kin or other relative refuses to give medics permission to proceed.

NHS Greater Glasgow and Clyde today launched “RESPECT MY DYING WISH” - a major new campaign to urge people to tell their loved ones about their decision to donate and to ask them to respect their dying wish.

Professor Kevin Rooney, Consultant in Anaesthesia and Intensive Care Medicine at Paisley’s Royal Alexandra Hospital, is one of the clinicians leading the campaign.

He explained: “While there has been a successful national focus on driving up the numbers of people who carry a donor card, in recent months we have become aware that one of the biggest obstacles to successful transplants is actually due to relatives refusing to allow organs or tissue to be taken for transplant.

“All too often, families are so distraught that they will not give permission even though the deceased had agreed to be a donor.

“Just one of those willing donors who had their wish overruled could have given us the opportunity to help up to nine of the 808 people currently on Scotland’s transplant list.”

These social media and digital options have been created so that people can have fun and help make sharing their wishes easier within a wide circle of friends and relatives. However it important not to forget that sometimes a simple conversation can be the most effective way of asking family to respect your dying wish.

Kevin added: “More than 90% of families would be prepared to donate the organs of loved ones in the event of their death, if they are registered and their wishes are known.

“Sadly, this drops to nearer 40% if donation wishes are not known.

“It is staggering to think that something as simple as a conversation with loved ones can mean the difference between life and death for others.

“You can see how important it is to ask your family to respect your dying wish.”

56 year old grandfather of two, Ian Grant from Carnoustie, has been on the transplant waiting since April this year. Due to his ill health, Ian had to give up his job in the oil industry which took him across the globe and he is now calling on all Scots to back the campaign.

He said: “It is so important to tell your loved ones that you have signed up to the register and crucially that you want them to respect your dying wishes. If you think about it family members respect what is in the Will of their deceased relative so why shouldn’t a person’s dying wish to donate their organs be respected by their family too?”

Ian suffers from Acute Heart Failure and was dramatically brought home to Scotland by specialist doctors after falling ill whilst working in Singapore.

He added: “Every month my condition worsens and I can do less and less. I am so used to working hard and getting to grips with different oil projects all over the world. It is just so alien to me to be so debilitated. I understand totally how hard it must be to agree to a loved one’s organs being donated at what will undoubtedly be the worst moment in someone’s life but just one person’s organs can help save or change the lives of up to nine people and that, in my view, is a very real legacy.”

HOW TO TAKE PART IN THE CAMPAIGN
There are lots of ways to take part and support the campaign. These include: like and visit the campaign facebook page; update your status to tell everyone you're an organ donor; add a Respect My Dying Wish timeline cover to your page and 'add' that you've joined the NHS organ and tissue donor register to your timeline.

People can also follow the campaign on twitter and retweet and quote campaign tweets to their own followers.

There’s also an option to add a Twibbon to your profile picture on Facebook and or Twitter – a badge which shows you support the campaign. Twitter will automatically tweet to let your followers know about you supporting the Respect My Dying Wish Campaign.

People can also create their own digital donor message card that can be sent to friends and family via email, twitter or Facebook.


FAST ORGAN DONATION FACTS
• Tissue donation is the gift of tissue such a corneas, skin, bone, tendons, cartilage and heart valves to help others
• On any given day there are around 800 people awaiting an organ transplant in Scotland
• Last year more than 550 people in Scotland got a new lease of life thanks to an organ transplant. 96% of us would take a donation if needed
• Although the support rate for organ donation is around 90% in Scotland, only 39% of us are signed up to the register
• Last year 197 people with a severe eye disease or injury had their sight restored by donated corneas in Scotland
• A bone transplant can prevent limb amputation in patients suffering from bone cancer
• Heart valves are used to help children born with heart defects and adults with diseased or damaged valves
• It is possible to sign p to the organ donation register from the age of twelve
• Kidney transplants are the most commonly performed