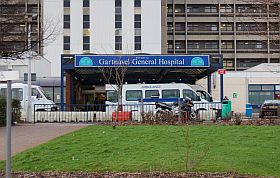 The 38 year old male affected is being treated in complete isolation in the Brownlee specialist unit in Glasgow and all the appropriate infection control measures are in place. His condition is described as critical.

The patient returned to Glasgow on a connecting flight from Dubai (Emirates flight no EK027) which arrived in Glasgow at 12.35 pm on Tuesday 2 October. He was admitted to hospital within three hours of his arrival.

The risk of person to person transmission of this virus is extremely low. However as a precautionary measure those who have been in close contact with the patient are being contacted to ensure that there has been no transmission.

This includes tracing three of his fellow passengers on Emirates flight EK027 from Dubai to Glasgow arriving at 12.35pm on Tuesday Oct 2nd who were seated in close proximity to him on the flight. These three passengers are being contacted directly as a precaution to ensure that there has been no transmission.

The risk to all other passengers on the flight is extremely low however if they have any concerns they should contact NHS24 on 08000 85 85 31 for advice, further information and reassurance.

Given the fact that this man went in to the care of the NHS within three hours of his flight arrival in Glasgow and travelled directly home via private transport from the airport we are confident that his close contacts subsequently within the city were minimal.

We have also identified all NHS staff, airport and airline staff who have had contact with the patient and any necessary follow-up action will be taken.

Dr Syed Ahmed, NHS Greater Glasgow and Clyde Consultant in Public Health who is coordinating the investigations into this case, said: “The risk of person to person transmission of Crimean Congo Viral Haemorrhagic Fever is extremely low as it can only be transmitted by direct contact with infected blood or body fluids. It is not a virus which is transmitted through the air. As such the risk to those who were in close contact with him is minimal.

“Crimean Congo Viral Haemorrhagic Fever is a widespread tick-borne viral disease. It is not common in Western Europe but is endemic in parts of eastern and southern Europe, central Asia, Africa, the Middle East and the Indian subcontinent.

“It is caused by infection with a tick-borne virus (Nairovirus) in the family Bunyaviridae.

“As soon as laboratory sampling confirmed that the patient was suffering from this virus all the appropriate agencies were informed.”

The helpline number for anyone on flight number EK027 to call if they have any concerns is 08000 85 85 31. The helpline will be available between 8am and 10pm daily seven days a week.

What is Crimean–Congo hemorrhagic fever?
It is a widespread tick-borne viral disease, a zoonosis of domestic animals and wild animals, that may affect humans. The pathogenic virus, especially common in East and West Africa, is a member of the Bunyaviridae family of RNA viruses. Clinical disease is rare in infected mammals, but commonly severe in infected humans, with a mortality rate of up to 30%. Outbreaks of illness are usually attributable to contact with blood or body fluids from infected animals or people.

Where is the disease found?
Crimean-Congo hemorrhagic fever is found in Eastern Europe, particularly in the former Soviet Union. It is also distributed throughout the Mediterranean, in northwestern China, central Asia, southern Europe, Africa, the Middle East, and the Indian subcontinent.

What are the symptoms?
The onset of CCHF is sudden, with initial signs and symptoms including headache, high fever, back pain, joint pain, stomach pain, and vomiting. Red eyes, a flushed face, a red throat, and petechiae (red spots) on the palate are common. Symptoms may also include jaundice, and in severe cases, changes in mood and sensory perception. As the illness progresses, large areas of severe bruising, severe nosebleeds, and uncontrolled bleeding at injection sites can be seen, beginning on about the fourth day of illness and lasting for about two weeks.