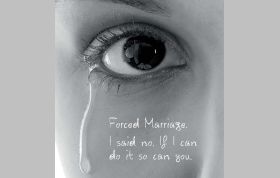 Frontline health staff working in Scotland’s largest health board are being offered guidance on how to spot the signs and help patients who may be victims of a forced marriage.

Healthcare staff are one of the only groups of professionals who may have the opportunity to engage with patients who are in a forced marriage and are therefore in a unique position to get them help.

While the majority of victims are women, particularly from the South Asian community aged between 13-30 years of age, other groups are also at risk.

People with learning disabilities are sometimes exploited because of their potential to be the ‘highest’ earners in a household due to the range of benefits and services they are entitled to.

Forced marriages can also involve people who are lesbian, gay, bi-sexual and transgender who are targeted because of their sexual orientation.

Recognising signs of forced marriage can turn around a life as contact with a health worker may be the only chance for someone either at risk of being forced to marry, or who is already in a forced marriage, to get help and protection.

It also provides guidance on what to do if a patient discloses their situation.

Catriona Renfrew, NHS Greater Glasgow and Clyde, Director of Corporate Planning and Policy, said: “We believe that everyone has a right to enter into marriage with their full and free consent.

“The Scottish Government has introduced legislation to prevent an individual from being forced or tricked into marriage and we recognise that our staff could be in a unique position to identify patients who are or have been coerced into marriage.

“We want staff to feel confident about the help, support and protection they can offer. It’s worth remembering that although the majority of victims of forced marriage are female, men can also be put under pressure, together with people with physical and learning disabilities.

“Lesbian, gay, bi-sexual and transgender people are also be targeted as a means of repressing their sexual orientation.”

While all NHS Greater Glasgow and Clyde staff can play their part, staff in accident and emergency, mental health, and maternity services are the likely first points of contact.

Community staff working in South Glasgow, an area which has a high ethnic population, can also be key to picking up distress signals.

Kath Gallagher, NHS Greater Glasgow and Clyde Planning and Development Manager, Corporate Inequalities Team, explained: “This is a situation very hard to disclose and it can lead to self-harm, depression, anxiety and even suicide.

“Addictions workers can play a role as people may also resort to drug and alcohol as coping mechanisms.

The policy offers guidance on how staff who suspect that a patient is in a forced marriage should try to speak to them privately, in the same way they would do if they believe that the person is a victim of gender-based violence or is being trafficked.