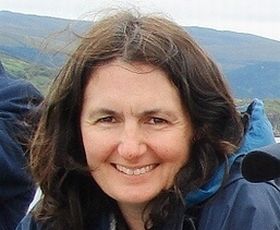 The cardiac department at the New Stobhill Hospital has been renamed in memory of Dr Kerry-Jane Hogg, one of Scotland’s most distinguished and respected cardiologists, who died in December 2010.

At a moving ceremony last month, attended by Dr Hogg’s widower Mr Michael Aitchison, a consultant urologist at Gartnavel General Hospital, daughter Lucy (18) and son Max (16), together with around 120 colleagues and patients, the first floor department at Stobhill was rededicated as the Kerry-Jane Hogg Heart Unit.

Dr Hogg (51), highly popular with patients and staff, was a pioneering medical researcher and expert on pacemakers.
She spent the majority of her 28 year career at Stobhill and transformed the hospital’s pacemaker service.

Paying tribute to Dr Hogg, long-time colleague Dr Frank Dunn, consultant cardiologist, said: “We are delighted that everyone has been so supportive in this plan to rename the cardiology unit given Kerry's outstanding service as a junior doctor and as a consultant cardiologist over a prolonged period. She was greatly loved by patients and staff alike.

“I was handling her clinics when she died and I’ve never experienced the outpouring of love and affection her patients had for her.”

Dr Hogg graduated from Glasgow University in 1982 as the most distinguished female graduate of the year.
She went on to become an honorary senior lecturer at Glasgow University, achieved at MSc in clinical pharmacology, held the post of secretary to the Scottish Cardiac Society and published key studies on blood-clotting.