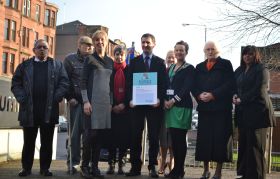 A new campaign was launched today encouraging smokers to quit with the help of Scotland's national stop smoking helpline.

Smokeline 0800 848484 offers people tips on how to kick the habit geared towards their personal circumstances and needs.

Public Health Minister Michael Matheson was in Glasgow to launch the campaign alongside people who have successfully stopped smoking, including husband and wife Christopher and Gail Harvie, who quit when they realised the effect their 50-a-day habit was having on their finances.

A new Scottish Government-commissioned survey suggests four in 10 smokers are smoking at least 15 cigarettes per day, but only a quarter think that they are spending more than £1,750 a year on cigarettes - less than the average annual cost of smoking for a 15-a-day smoker of £1,916, suggesting many are underestimating the true cost of their habit.

The survey reveals that more than half (55 per cent) of smokers questioned are making an attempt to stop smoking as a New Year resolution and for the vast majority of these, health (81 per cent) and money (70 per cent) are cited as the top two reasons for quitting.

Speaking at the launch at Partick Community Centre for Health, Mr Matheson said:

"We know that the majority of people in Scotland who smoke want to stop, which is the single biggest step someone can take to improve their health.

"Quitting can reduce a person's risk of having a heart attack or coronary heart disease and also enable people to make big savings when household budgets are under pressure. A new survey suggests many people underestimate the financial cost of smoking.

"Quitting is a common New Year resolution. We know people are less likely to succeed if they go it alone. Our new campaign tells smokers that they are more likely to succeed in making 2012 the year they quit for good by calling Smokeline for free on 0800 848484. Smokeline can help people find the right quitting method to suit their lifestyle.

"There's a huge range of support available - from face-to-face or online to nicotine replacement therapy and group sessions - and Smokeline can help put people in the right direction."

"When my husband Christopher and I realised we were spending about £500 a month on cigarettes we were shocked. We knew it was time to quit smoking for good, not only for the obvious financial benefits but also for our health. The difference since we quit smoking has been incredible, and we are now able to exercise regularly. We couldn't have quit without the support of our local cessation advisers, and we'd urge anyone who is ready to stop smoking to call Smokeline to get free help and advice."

"Despite significant progress in tackling tobacco use, smoking remains the single largest preventable cause of death in Scotland and a key driver of health inequalities. The effects of smoking on the population of the West of Scotland is particularly acute contributing significantly to high levels of cancers, heart attacks, strokes and other conditions.

"NHS Greater Glasgow and Clyde welcomes the launch of the new smoking campaign which will help to promote Scotland's very successful stop smoking services. All the evidence shows that the best way to quit smoking once and for all is with the support of services specifically designed to help you quit."

As part of this year's campaign, the Scottish Government is once again teaming up with Scottish Slimmers to offer its members advice and information on giving up smoking. This year, Slimmers will be incentivised with a joining fees discount if they call Smokeline and take the first step toward a smoke free future.

A Scottish Government roadshow team will be visiting locations across Scotland to inform and advise smokers who want to quit. Visitors will be able to take lung ageing and carbon monoxide tests and also pick up quit calendars to support them through their quit attempts.

TV advertising will highlight the services provided by Smokeline.

For further information on the various quit methods available, plus advice and support call Smokeline on 0800 848484.

The new survey was carried out online by Opinion Matters amongst a sample of 501 Scottish adult smokers. Fieldwork was undertaken between December 15 and 22.

The average price of a packet of 20 cigarettes is £7. Based on this price, a person who smokes 15 cigarettes a day will spend £1,916 per year.