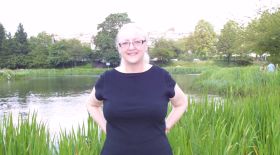 Two of the city’s biggest employers have taken each other on in a head-to-head virtual walk challenge from Glasgow to Dehli and back again to bring home the Commonwealth flag.

Seventy-five teams of six people from both NHS Greater Glasgow and Clyde and Glasgow City Council took part walking 115 miles each over the five-week challenge. Each member had to walk 23 miles a week or just over three miles a day.

Staff from both organisations took up the challenge including NHSGGC chief executive Robert Calderwood and council leader Gordon Matheson.

The total distance walked by both teams was 126,966 miles.  The winning organisation was Glasgow City Council who just pipped NHSGGC at the post.

Among the many inspiration walkers who discovered the joy of getting active through this fun, competitive activity was Gartnavel General staff nurse Carol Black.

Carol, once preferred to sit with a good book at lunchtime, but the Delhi Virtual Challenge has changed all that.

She joined team “Mushroom” and now formerly non-sporty Carol has put aside her books in favour of regular mid-day walks and now travels to and from her local railway station by foot rather than getting off the train and straight onto a bus to go home.

Her new “take on life” active approach has culminated in her being named NHSGGC “Inspirational Walker” of the challenge.

And her enthusiasm knows no bounds as Carol took part in the 5K Race for Life with other members of her team and is planning to run another 5K soon.

Carol said:  “Once I started it just became a habit!”

She become so committed that she even began walking in the evenings. Carol added:  “I realised that I wasn’t walking as much as I thought I did, so some evenings after tea I would go out and do a bit of walking to make up my steps.

“I also walk to the railway station instead of getting the bus, which is a 20 minute walk each way.  Walking clears your head and I feel guilty now if I miss an opportunity.  I would encourage other staff to take it up.

“You feel better, you feel fitter and you have more energy!”

Senior charge nurse Gillian Mulholland from the Brownlee Outpatients Department at Gartnavel General nominated Carol for the ward.  Gillian said:  “Carol has been clocking up more steps per day than us folk who thought we were active!  She has been graceful in her successes and is not one to crow, but she has done so well that we all look to her as a mentor.”