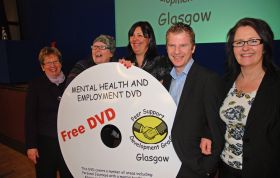 An innovative DVD launched earlier this year in a bid to help former mental health patients get back into work has attracted major attention from experts across the world.

Funded by NHS Greater Glasgow and Clyde, “Journey to Employment” is a DVD of moving stories told by former mental health patients and their efforts to get back into work.

Since the DVD’s launch in February this year mental health experts from Australia, New Zealand, Canada and the UK have requested copies of the DVD and more information with a view to producing a similar resource.

The DVD was made in collaboration with members of the Peer Support Development Group in Glasgow.
It is aimed at people who have experienced a mental health issue and are considering employment or returning to work and also at support agencies.

The DVD, produced by community artist Susan Steell, includes interviews with former patients who returned to work, an employer, career advisors and a senior member of the Scottish Trades Union Congress.

Sylvia Collumb, NHSGGC’s Programme Manager (Mental Health and Employability), said: “For many people returning to work can be one of the best ways to help their recovery, providing the right help and support are in place for them.

“Research shows that less than 40 per cent of employers would consider employing someone with a mental health problem.

“However people can and do recover from even the most serious long-term mental health problems and the personal stories told in this DVD is proof of that.

“I am delighted that colleagues both nationally and internationally have found this DVD a useful ‘toolbox’ which patients and service users can dip into for help, advice and guidance as they recover and prepare for their new life in employment.”

Margaret Park is chairwoman of the peer support group and a former physiotherapist, who was forced to take early retirement because of physical and mental health issues.

She explains that when she felt ready to return to work an initial interview with an employment advisor to discuss her skills concentrated on “what I was unable to do, my disabilities, we never looked at the skills I had from my career.”

However a year later, and with a different advisor, Margaret joined the WIN mental health pilot project in south west Glasgow.
She said: “They welcomed me with open arms, allowing me to volunteer whilst building my hours until two years later I took the plunge and entered paid employment.

“What I would say is help is out there for anyone who thinks about or wants to work even if it is just an idea you have.”