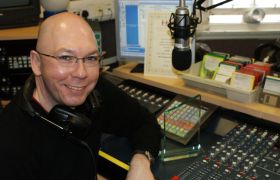 A Glasgow hospital radio station has won a top UK broadcasting award for a programme about one of Scotland’s greatest cyclists.

Volunteer run Victoria Infirmary Radio (VIR) picked up the silver award in the Best Speech Package at the National Hospital Radio Awards 2011 for Stuart Watt's "King of the Mountain" a profile of professional cyclist Robert Millar currently the most successful British cyclist to have ever competed in the Tour de France.

Programme controller Stuart Watt said:  “The programme itself was a profile of Robert, who grew up in the southside of Glasgow.

“It was originally broadcast in 2009 to mark the 25th anniversary of him winning the 'King of the Mountains' jersey in the world famous Tour de France.  It is one of the most difficult sections of the bike race because it involves climbing hills.  Robert himself is regarded as one of the great riders of the 1980s.”

The programme has since been re-edited for further occasional broadcasts and hospital patients will have a chance to hear it again as the Hospital Broadcasting Service in Glasgow has decided to rebroadcast the programme.

Stuart, who also works for Traffic Link UK which supplies live traffic and travel news to radio stations throughout the UK, said:  “I’ve always preferred radio to television because it’s a much more immediate and emotive medium.

“We get a really good reaction from patients when we visit the wards asking if they have any requests.  It gives people human contact, which is a big part of hospital radio, meeting the patients and having a wee blether.”