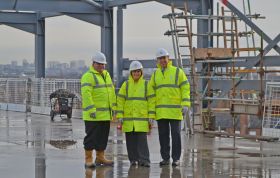 The full business case for the South Glasgow Hospital project was approved by the Scottish Government’s Capita Investment Group (CIG) on December 10. All capital projects with a value of more than £5 million need CIG approval to proceed.

The construction of the new Laboratories began in February 2010. Above ground work commenced in Summer 2010. The building will be fully sealed by spring 2011 with the full building due to complete in March 2012.

The facility will house the laboratory specialities of biochemistry, haematology, blood transfusion, microbiology, genetics, and pathology and hospital mortuary services. In addition, the Glasgow city mortuary will also be transferring to the new facility together with facilities management for the whole New South Glasgow Hospitals Campus site.

“Internal fit out is progressing well and the first phase of the project is on course for completion in Spring 2012 as planned.”

“Brookfield Construction (UK) Ltd are very pleased to have reached this significant stage of the building works on the labs building to programme.

“Taken together these major strides forward, with the new South Glasgow Hospital at the centre, we will have the tools for the delivery of sustainable, high quality, cost effective healthcare for NHSGGC residents and beyond.”

“I am delighted that this key milestone in the delivery of this ambitious project has been achieved. The full project will see us complete a programme of investment of more than £1.5 billion in modern healthcare accommodation across both acute and mental health facilities.

“Centralising services for all ages on a single site will ensure that everyone can access the widest possible range of specialist services and will also bring with it increased efficiency, shorter waiting times and better continuity of care.”

“The completion of the lab building is just the first step in this exciting journey for patients across the West of Scotland.

“This major investment shows that despite the significant cuts to Scotland’s capital budget the Scottish Government is continuing to prioritise spending on our NHS to improve patient care.

“The new Southern General is Scotland’s biggest ever hospital building project and will be entirely publicly-funded.

With 1,109 beds, the adult hospital will sit alongside a 256 bed children’s hospital, providing maternity, paediatric and acute services on a single site. The lab will link to the main hospital via a subterranean tunnel.

The lab is just one part of the £842 million publicly funded project which will see an integrated children’s and adult hospital built on the site of the current Southern General.

Covering approximately 25,000 square meters the new ‘super’ lab will serve the whole of the south of the city.

Cabinet Secretary for Health and Wellbeing Nicola Sturgeon marked the occasion by performing a ‘topping out’ ceremony at the site.