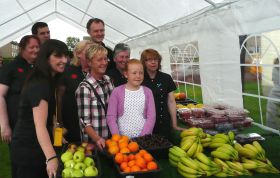 East Dunbartonshire’s successful Food Co-op celebrates its first anniversary on Tuesday (March 1) and two more “outlets” have sprung up since then.

A local partnership between East Dunbartonshire Community Health Partnership (CHP) and Hillhead Housing Association, saw Hillhead Community Centre in Kirkintilloch become home to the first food co-op, and since then others have been launched in Hillhead Resource Centre and Kirkintilloch Health and Care Centre.

On the first day the co-op, run by volunteers, attracted more than 100 customers who took up the offer of being able to buy high quality, low cost fruit and vegetables.

Since then the co-ops have gone from strength to strength with an amazing 7500 customers flooding through the doors and spending a staggering £31,500!

And by the end of January this year the 22 committed volunteers themselves had collectively given 3500 hours of their time to the project.

“The partners and local residents are well aware of the health benefits linked to the regular eating of fruit and vegetables. This project aims to improve the health of our local communities and in the long term to support Scotland’s goal in preventing ill health from the major diseases such as cancer and heart disease.

“Before the food co-op started, East Dunbartonshire CHP undertook some local research which highlighted that only 40 per cent of people from Hill head and Twechar regularly ate five portions of fruit/vegetables per day.

“Local people also told us how difficult it was to access and buy good quality fresh fruit and vegetables as supermarkets were quite a distance away.”

Volunteers are recruited, supported and encouraged through a tailor-made training programme which includes food hygiene, customer care, healthy eating, using a cash register, weights and scales and health and safety.

The volunteers also gain new and additional skills in a range of aspects relating to healthy eating, covering nutrition and cooking.

This training has improved the skills and knowledge of the volunteers and helped them improve their confidence and health, whilst also providing a great support to their community.

Now the food co-op is looking forward to their second year and hopes to extend to other communities during 2011 if enough people come forward to volunteer and support the project.

The food co-op accepts healthy start vouchers and operates from Hillhead Community Centre on Mondays between 10am and 1pm; Hillhead Resource Centre on Tuesdays from 1-3pm and in Kirkintilloch Health and Care Centre on Wednesdays, 10am to 1.30pm.

Volunteers have described the personal benefits they have gained, one said: “It’s very rewarding working with a nice group of volunteers and being involved in the local community. It’s also given me the opportunity to gain new qualifications in First Aid and Food Hygiene.”

Another added: “I was ill and it gave me my confidence back. I have also met a lot of new friends.”

And a third volunteer summed up their experience by saying: “The co-op gave me just what I needed to get the ‘real’ me back out in the open. It definitely played a large part in getting me my new job.”
ends