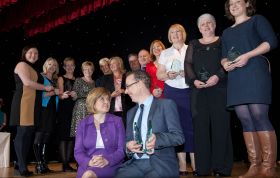 Chris was named overall winner of the prestigious awards collecting the Chairman’s Award of Excellence on top of his award for nursing from cabinet secretary for health, wellbeing and cities strategy Nicola Sturgeon.

The Awards recognise some of NHSGGC’s most hardworking and dedicated staff in one of the UK’s biggest health boards, honouring staff who have gone that extra mile to make a special difference to the lives of patients and their families as well as services which have been specifically designed to make life easier and better for patients.

Chris, who lives in Greenock, is the only inflammatory bowel disease (IBD) nurse specialist in Paisley’s Royal Alexandra Hospital. He was nominated by patients he has cared for as well as nurses and doctors he’s worked with. Despite his busy schedule and heavy workload, nothing detracts from his attention to detail and commitment to going that extra mile for his patients.

He was described as the “glue that holds the team together” but Chris maintains he couldn’t do his work without the support of the consultants and medics around him. “I am part of a great team and can go to any of the doctors with any issues that arise.”

One colleague, consultant gastroenterologist Dr Mathis Heydtmann, said of Chris: “In my entire career in medicine I have never met a nurse like him.”

RAH consultant surgeon Andrew Renwick added: “He has shown phenomenal dedication to his role and continually goes far, far beyond the call of duty. He has helped co-ordinate the care of a most difficult group of patients and has undoubtedly improved the quality of care in this group.”

However Chris remains very modest about his success saying he has an equal amount of respect for his colleagues and he wouldn’t have been able to advance the service and his skills without their full support. He added he was honoured to even be considered for the award let alone win.

Chris said: “It was really great to receive the award but I really couldn’t have done the work without the support of the consultants and medics. I am part of a great team and can go to any one of the doctors with any issues that arise.”

One of the reasons Chris has proved to be such an asset to the team is his willingness to take on new projects and develop them. One of the many initiatives Chris has taken forward is the creation of advice podcasts aimed at younger patients who really didn’t connect with more traditional printed patient leaflets.

He spends as much time with each patient as they want and need (and he can manage!) as well as studying for his masters. All that and he still managed to set up an advice helpline which responds to patients individually within 24 or 48 hours.

The cabinet secretary Nicola Sturgeon who presented all the finalists were their awards said: “It is inspiring to see the quality of the award winners here. That there is such diversity in the service areas represented evidences the depth of commitment to dedicated patient care that runs throughout the health service within Greater Glasgow and Clyde.

“These awards have gone from strength to strength and I am personally delighted to be here to help honour the achievements of the eight category winners.”

NHSGGC Chairman Andrew Robertson added: “This is the second year of these awards and I am delighted and impressed with the enthusiasm shown by patients and their relatives and healthcare professionals in identifying worthy nominees.

“There were just over 120 nominations this year – and every single one of them had its own powerful reason for being there. I am convinced that for every nomination received there are a hundred others who are going that extra mile to make a special difference to the lives of patients and their families at the time of greatest need.

“It is my very great pleasure as Chairman of NHSGGC to mark out a few of the best of them to in some small way and I applaud you all.”