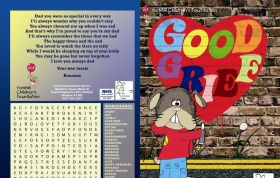 A magazine created by young people to support young people to cope when someone in their life dies has been launched by the Family Bereavement Service at the Royal Hospital for Sick Children (RHSC).

Funded by Yorkhill Children’s Foundation, “Good Grief”, has been created and designed by children and young people who use the hospital’s Family Bereavement Service. It was created through a series of issue-based cartoon design workshops and one-to-one sessions.

The magazine aims to help children and young people to understand that they are not alone in learning to live with the loss of someone close.

“We are so proud of all the children and young people who have been involved in the production of the magazine.

“We use creative activities to encourage young people to express some of their difficult thoughts and feelings after someone in their life dies, and the magazine will not only help the children who currently use the service, but will also give children a clear picture of what the service is like should they need to make a visit.”

The Bereavement Service uses a variety of creative methods to encourage children and young people to express their grief.

For example a “memory box”, Ruth explained: “Young people can place items that belonged to their special person inside the box and decorate it with pictures that remind them of the person. This can be a healthy way for the young person to continue a bond with their special person and know it is ok to include them in their life even after they die.

“We also use a ‘feelings mask’ activity where children are encouraged to paint different colours onto the mask to represent the different feelings that they may be hiding from other people.

“It’s a similar approach with a ‘feelings volcano’, children can write down what they are feeling on different shapes they have cut out and then attach them to the volcano to make it look like they are exploding.

“We explain that these thoughts and feelings are normal and healthy as part of the grieving process.”

The magazine is being handed out prior to young people attending the Bereavement Service as a way of preparing them for what to expect when they come along either for a one-to-one appointment or group support.

It is also available to the people who have contact with children e.g. GPs, schools or social workers.

“A common problem for young people affected by bereavement is difficulty in controlling their temper. Young people can learn about anger being a natural reaction when someone they care about dies. A lot of children think they are bad to feel angry. The magazine shows an example of one good way to let your anger out without hurting anyone or damaging anything. An ‘anger/comfort pillow’ can be punched or screamed into as a good way to express anger.”

A lot of young people can feel isolated after bereavement when their friends might avoid them because of not knowing what to say or do. Some young people have told us that they have shown the magazine to their friends to give them an idea of what they are going through.

“We were delighted to be able to support the Family Bereavement Service in this way. The magazine is a great way for children and young people with similar experiences to come together, incorporating their views and opinions.

“We are sure it will have a positive influence on a child’s development and wellbeing.”

The Foundation raises funds to provide the “enhanced” medical equipment and resources which benefit the lives of children and babies from throughout Scotland who receive treatment, or use services within NHS Greater Glasgow and Clyde.
Ends