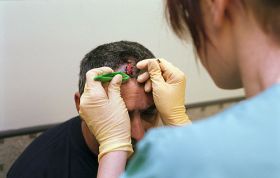 NHS Greater Glasgow and Clyde (NHSGGC) has produced a short, explanatory and user friendly DVD about the roles of its Minor Injuries Units (MIUs) and the kinds of injuries they treat.

The 90 second film is now being shown on large information screens in the waiting areas of healthcare sites in the New Victoria and Stobhill Hospitals’ catchment areas and is actually a shortened version of a longer 15 minute film.

It was produced by NHSGGC in conjunction with the Scottish Health Council (SHC) especially for use on the screens and on the Board’s website for people who may not have time to watch the full version, but still provides viewers with the key messages, and also contact details if they would like more information.

To ensure that the content of the film matched the public’s need for understandable information, focus groups were held with members of the Board’s Patients’ Panel, members of an adult literacy and numeracy group and representatives of Glasgow’s ethnic communities.

Richard Norris, Director of SHC, said: “We were pleased to work with NHSGGC on this project.

“It is hoped that the DVD will give patients and public the in the Greater Glasgow area a clearer understanding of the role of MIUs.

The DVD takes the form of a question and answer session between a member of the public and an MIU emergency nurse practitioner (ENP) who are backed up by emergency medicine consultants.

In answer to questions about the kind of injuries the new hospital MIUs treat during their opening hours between 9am and 9pm, the member of staff explains that the units are for people who require treatment but it is not an emergency situation.

“This group of patients accounts for over 50% of the attendances at accident and emergency departments, but by attending an MIU, which is more appropriate for their injuries they will be seen and treated more quickly.”

And the message is steadily getting across to the public. Figures show that between July 2009 to March 2010 and from April 2010 to December 2010 there has been a 16 per cent and five per cent increase in patients attending the New Stobhill and New Victoria MIUs respectively.

MIUs will treat adults and children five years and over for a range of injuries including bone sprains and fractures; minor head and neck injuries; cuts and grazes including stitching; infected wounds; eye and ear injuries; minor burns and scalds; and assess minor injuries and refer patients to specialists if required.

Staff at the units will also arrange for x-rays and interpret them, and issue prescriptions, which before would have been a doctor’s responsibility.

All children under 12 months should attend the A&E department at the Royal Hospital for Sick Children at Yorkhill, and youngsters between 1-5 years should be taken to either Yorkhill A&E or the nearest adult emergency department.

It can also be used during outreach sessions with such groups as well, for example, community councils, community reference groups, local Public Partnership Forums.
Ends

Notes for Editors:
The Scottish Health Council’s role is to improve how the NHS in Scotland involves people in decisions about health services.