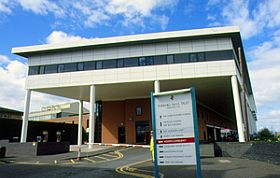 Two doctors from the Royal Hospital for Sick Children at Yorkhill working with an engineering graduate are the only Scottish entry to make the finals of this year’s International Dyson Award.

Consultant Anaesthetists Graham Bell and James Limb, together with Ian Guy, a Product Design Engineering Graduate of Glasgow School of Art, have produced a solution to the potentially fatal problem of air bubbles in intravenous drip lines, called air entrainment.

One of 20 finalists from 18 countries, if their idea is developed it could be used in hospitals around the world. The trio will hear on Tuesday, October 5 if they will pick up the prestigious award.

Dr Bell said: “The project has been a year in development. Dr Limb and myself identified the problem which can lead to clinical implications when air gets into i/v fluid lines.

“These bubbles can create an air embolism. Small bubbles are undesirable even in adults, but can be a huge problem for a small child if it causes a blockage in a blood vessel, stopping blood to flow to vital organs.

“Now as a result of working with Ian we have found a potential solution.”

Ian has produced a simple redesign of the intravenous drip and said: “The solution seems initially surprisingly low-tech, however for me a true solution not only needs to solve the problem but also be easily manufactured, and implemented within a medical environment.”

The answer includes the addition of a small floating seal which prevents large volumes of air passing into the IV Line. The large volumes of air originate from the container.
Ian is no stranger to awards, he was second in the University of Glasgow’s Big Idea award, and picked up first prize in the Science, Engineering and Techonology Category in the Scottish Institute for Enterprise’s New Ideas Competition, securing funds to patent the new device.

“This is a practical but simple idea which can play a major part in patient safety. I applaud the team-work put in by Graham, James and Ian, and wish them well for the final hurdle of this much sought after award.”