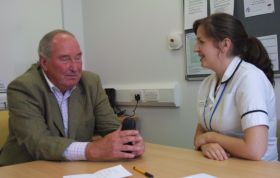 One of Scotland’s most erudite and successful businessmen is battling very successfully to recover from a little known hidden condition, aphasia.

Today prominent estate agent Roy Slater (65) has joined forces with NHS Greater Glasgow and Clyde to raise awareness of the debilitating condition, which 10 months ago robbed him of his ability to speak coherently.

Roy, who was semi-retired at the time, recalled: “It was a normal Friday and I had made plans to meet a friend for lunch:

“We had just finished, I got up from the table and when I started talking to my friend, it was complete gobbledegook.

Roy is now an outpatient at the New Victoria Hospital and is working on his recovery as part of a group of other patients with speech and language therapists, Rachel Thomson and Sheetal Basi.

It was a real shock because although Roy had experienced two minor strokes before, there had been no lasting ill effects. This time as well as his speech, he also experienced some problems with his writing skills:

“I had never heard of aphasia and every day I hoped my speech would come back.”

Although making excellent progress with his speech and language, Roy said, “What I miss most is the ability to always make myself understood.

“I’m wary of starting conversations with strangers and tend to socialise with people I know. I also carry a card stating that ‘I have had a stroke and sometimes I can have some difficulty in communicating.”

“Meeting other patients with aphasia has been very helpful, we’ve all formed a close bond and support one another, and the group support has been fantastic.”

Aphasia occurs following a stroke or head injury and leads to a breakdown in a person’s ability to understand what is said to them and/or to express themselves using speech.

Approximately one third of people who have had a stroke have aphasia.

The condition varies from person to person with some people being affected only mildly, while others experience a more severe communication breakdown.

Rachel explained: “When patients come in we assess their communication strengths and weaknesses and work to improve language skills that have been impaired, such as finding the right words to say and using the correct sounds to form these words.

“Aphasia is a hidden disability and as a result people with aphasia frequently report being frustrated at the way they are treated by people who are not familiar with the condition.”

Now back at work, Roy Slater’s best tips: “Don’t be afraid of Aphasia, try to keep light-hearted and if you get stuck – find another word”.

If you encounter someone whom you think may have communication difficulties there are a number of things you can do to support them:

• If possible, choose a quiet environment and interact on a one-to-one basis.
• Be patient. Give them time to understand what you have said and form their response.
• Speak slowly and clearly, using familiar words.
• Encourage them to use any means possible to get their message across (eg writing or gestures).
Ends