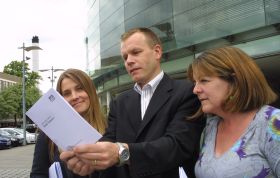 A Glasgow nurse and the daughter of a brain tumour patient have worked together to write Scotland’s first NHS Patient Brain Tumour Information booklet.

Mary Fraser, a specialist neuro-oncology liaison nurse at the Southern General Hospital (SGH), and Jetta McGill, whose father died from a brain tumour, have collaborated to create this unique brochure aimed at both patients and carers.

Patients have very many questions following diagnosis but feelings of shock and numbness often mean that they go unasked, this booklet aims to address them by
explaining in layman’s language what tumours are, their treatment and side effects.

Mary said: “The booklets also explain the psychological and emotional effects of a brain tumour.

“If a patient is feeling depressed or anxious and their behaviour has changed in some way, then either they or a relative can contact someone like me and if I think it necessary, then I would refer the patient onto a psychiatrist or psychologist for specialist help.

“Common questions include are they going to be very sick during treatment, but chemotherapy for brain tumours is not as severe as some for other tumour sites.”

The booklet is a project commissioned by the Scottish Adult Neuro-oncology Network (SANON).

It will be distributed to four specialist centres – the SGH, Ninewells Hospital in Dundee; Western General Hospital, Edinburgh; and Aberdeen Royal Infirmary, for a six month patient feedback.

Jetta McGill (31) and originally from Prestwick, is now a Commercial Trials Manager at Nottingham University Hospital following completion of a Ph.D in Neuroscience at Glasgow University before carrying out a post-doctorate in Huntington’s Disease at Cornell University in America.

Her father Quintin (57) died in June 2008 a few months after he and Jetta’s mother, also called Jetta, moved to Harrogate and shortly after his diagnosis.

Quintin was treated at Leeds General Infirmary, Jetta said: “The surgeon was communicating that dad was not going to recover and did his best to explain what the tumour was and where it was located but you are in such a vulnerable position and really, completely unable to comprehend anything anyone is telling you.

“I did a Ph.D. in Neuroscience which is why I was able to relay to my mum and brother what this tumour was, where it was located and why dad was not going to be able to survive.

“I can't explain the level of anxiety you feel in these situations and it's the not knowing and not fully understanding which just adds to that anxiety. It really surprised me that the ward had information on all kinds of things from what it's like to have a shunt fitted to living with a brain injury, yet absolutely nothing on brain tumours.”

Jetta then contacted Dr Willie Stewart, Consultant Neuropathologist at the SGH, whom she knows from her degree and Phd studies, and spoke about the lack of information. The idea of producing a booklet was then born.

She went on: “I don't think anyone should ever underestimate the importance of information. My mother, brother and I were all in shock, there would be things you would maybe understand at time but then afterwards you couldn't remember the explanation.

“So, having a booklet which walks you through the brain and all it's various functions, with an explanation on some of the terminology and useful websites for further information, can be an absolute lifeline for people.

“We are such an online nation now but what do you type in to google when you have been diagnosed with a brain tumour? The information out there is frightening and variable. In addition, if someone has been hospitalised due to their brain tumour, there are no computers in the hospital for the patient/family to be able to access the internet. Hence, being able to provide a patient/family member with a document which they can take away and read would make a huge difference.”

The booklet also includes a page to write down the contact numbers of a patient’s specialist team, space for questions to be noted down and asked at the next appointment, and a list of recommended websites and books.

Welcoming the booklet Dr Stewart said: “A lot of time and research, and emotional effort on Jetta’s part, has gone into compiling this information which I know will be reassuring to patients and families as they face what for them will be a difficult and anxious period following their diagnosis and treatment.”

Dr Robin Grant the SANON Clinical Lead added: “Patients require basic information about their type of brain tumour, because there are so many different types.

“They also require specific information relevant to their planned treatment, which may vary depending on the size, site and the effect that it has had on them. This information booklet also includes advice where they can get help locally in their region and is especially welcome because it will become a very personal possession of each patient in Scotland with a primary brain tumour”.

Also contributing to the booklet were Shanne McNammara, Neuro-oncology Nurse at the Western General Hospital, Edinburgh.

Advice also came from - Mr Laurence Dunn, Neurosurgeon at the SGH; Oncologists Dr Allan James and Professor Roy Rampling at the West of Scotland Beatson Cancer Centre.
Plus there was input from Flora Muir in Quality and Audit in the SGH; Dr Ally Rooney, Psychiatric Registrar in Edinburgh who is doing a thesis looking at depression in people with brain tumours; Dr Robin Grant, Neurologist in Edinburgh; the Supportive and Psychological Care group in SANON; and Charities such as Brain Tumour UK, Samantha Dickson Brain Tumour Trust, Brain Tumour Action, International Brain Tumour Alliance and brainstrust.