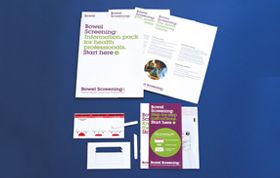 Throughout this month and June pharmacies across the NHS Greater Glasgow and Clyde Board area (NHSGGC) will be joining the campaign to encourage people to take the life saving bowel screening test.

For the first time, large scale posters will be displayed in the windows of more than 300 pharmacies across the Board area to help raise awareness and encourage people to find out more.

The posters feature people at a bus stop and encourage people to take the home-based test by openly asking ’We’ve done the test. Have you?’

All those aged 50-74 in Scotland are eligible for screening and will be sent a kit through their letterbox during a rolling two-year cycle.

As people often use pharmacies to seek health advice as well as get their prescriptions, information on the screening programme will be available through a ‘Know the Facts’ leaflet.

Liz Grant, NHSGGC’s Public Health Pharmacist, said: “I think this campaign is really important because dealing with bowels has always been an embarrassing subject to talk about.

“Hopefully the posters will help make the issue less embarrassing and raise awareness of bowel screening.

“The campaign is also highlighting the fact that pharmacists are trained health care professionals and this should lead to a better understanding that they have a wider role than simply dispense medicine.”

Dr Emilia Crighton, NHSGGC’s Consultant in Public Health Medicine, added: “Not everyone realises how important screening can be. The bowel screening will help detect new cases and I encourage everyone to take up the test. In addition, I would like to stress that if you have bowel symptoms, like bleeding, please contact your GP to have them investigated as soon as possible. “

Dr Crighton went on: “Bowel cancer is the third most common cancer in the UK and affects both men and women alike and as we get older the risk increases with nine out of 10 cases in people over 50. However, when detected early it can be treated effectively and many people can be cured.

“Within Greater Glasgow and Clyde there are approximately 750 – 830 new bowel cancer cases each year and approximately 350 – 400 deaths. It is essential that people use the kits and not be embarrassed or afraid to send us samples. The vast majority of results are perfectly normal. For the minority of people who do have positive results screening will mean early detection, quicker treatment and a greater chance of a cure.”

Assuming an uptake of 50 – 52% we anticipate that each year 2200 people will have a positive screening result, of whom 1400 will go on to have a colonoscopy and 137 will be diagnosed with bowel cancer.

1. Scotland has a higher incidence rate of bowel cancer than most other countries in the Western world:
• it is the third most commonly diagnosed cancer in both men and women;
• the second most common cause of cancer death for men;
• the third most common cause of cancer death for women;
• around 1,600 people die of the disease in Scotland each year;
• approximately 3,400 new cases are diagnosed each year;
• 95% of cases occur in people aged over 50 years; and the five year survival rate is approximately 50% for both men and women.

2. Following successful evaluation of the pilot, a phased rollout of a national screening programme for all men and women aged 50 -74 began in June 2007 with all NHS Boards on the Programme by December 2009. Men and women eligible for the programme are posted a simple test which they complete at home and return to the central Scottish Bowel Screening Centre in Dundee. Those completing the test are informed of their results by the Centre. If the Centre identifies something which requires further investigation, the person will be referred to their local hospital. More information can be found at www.bowelscreening.scot.nhs.uk