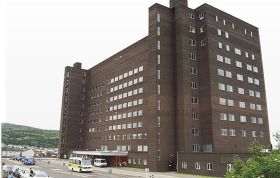 NHS Greater Glasgow and Clyde (NHSGGC) has given the green light to the IRH tea bar continuing to be run by League of Hospital Friends - with new healthy options on the menu.

NHSGGC’s plans to introduce an Aroma Café at the IRH formed part of a wider catering strategy. A major part of this strategy has been developed to ensure that all NHS catering outlets comply with nationally agreed healthy living catering standards

Following a very positive meeting, the IRH League of Hospital Friends has also agreed to meet these standards with the tea bar.

Robert Calderwoord, NHSGGC Chief Executive, said: “We are delighted that we have now reached a successful conclusion to our discussions with the League of Hospital Friends about the future of the tea bar.

“We are very much aware of the high regard in which the tea bar is held which is entirely justified and a strong case has been made for its retention which we have listened to.

“We very much look forward to the continuation of their long and proud service to the IRH and the donations the hospital receives from them.

“We will now work closely with the League of Hospital Friends to ensure that the produce served at the tea bar complies with the national health living award standards which all NHS catering outlets must comply with.”