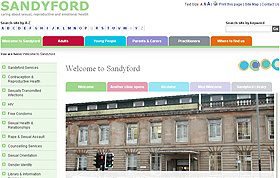 A new look website and expanded library services have been developed by NHS Greater Glasgow and Clyde which further enhance the already comprehensive sexual health services available from the Sandyford Clinic and local hub and satellite services.

The website has been revamped to make finding information on sexual health services quick and easy and an expanded library service on site will offer patients extensive information and advice.

The new expanded library service will offer a range of information on sexual health services and, in particular, on contraceptive methods available for both men and women.

Following an anonymous survey carried out in response to the Scottish Government’s ‘Giving You More Choice’ campaign launched last July it was recognised that women are still unsure what types of contraception is available to them.

The anonymous questionnaire was distributed to all females attending the Sandyford aged between 16 and 44 years old over a one week prior to the campaign launch in July 2009, and for a further two week periods in August and December 2009.

The survey highlighted the fact that although women recognised the campaign, their knowledge of the types of contraceptives available had not increased and there was little knowledge about LARC methods.

Anyone wanting more information on contraception or any other sexual health service can visit www.nhsggc.org.uk/sexualhealth

Long Acting Reversible Contraception (LARC) is any method requiring administration less than once per cycle. This includes all intrauterine devices (coils) and implants. They are more reliable than taking pills as they do not depend on being taken so often and are less affected by stomach upsets or anything that can stop the hormones getting into the system.

Condoms are also still recommended to protect against sexually transmitted infections and HIV.