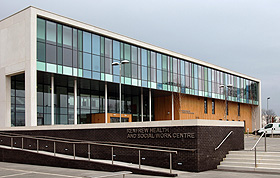 The state-of-the-art centre, which offers a unique model of joint services for Renfrew, picked up both the Design Award and overall Paul Taylor Award at the Health Facilities Scotland (HFS) conference.
Alex McIntyre, Director of Facilities for NHS Greater Glasgow and Clyde (NHSGGC), said: “We are delighted to have won these awards which reflect the excellence of the design and its focus on being both staff and patient friendly.
“I know that the centre has already been well received locally with extremely positive feedback from the community.”
Officially opened in August by Nicola Sturgeon, Cabinet Secretary for Health and Wellbeing, the Centre provides health and social work services to a population of more than 20,000 Renfrew residents in fit for purpose facilities.

The Centre brings together health and social work services under the one roof for the first time. It is home to 11 GPs from the three Renfrew practices which have relocated to the Centre plus a range of services including a general dental service, physiotherapy, podiatry, speech and language therapy, community nursing, the joint learning disability service for all of Renfrewshire and Renfrew social work services.
David Leese, Director of Renfrewshire Community Health Partnership (CHP), added:
“The Centre provides the very best facilities for community based health and social care services which the community can be rightly proud of. Through the Centre we have an excellent opportunity to work in partnership with social work colleagues to tackle a range of health and social issues which will be of significant benefit to the people of Renfrew.”
Councillor Eileen McCartin, Convener of Renfrewshire Council’s Community
and Family Care Policy Board, : “Throughout the planning and preparation for this facility all of us involved focused on delivering integrated services which would tackle a range of social and health issues.
“The positive feedback we’ve had locally since the centre opened has now been backed up with two prestigious national awards. Clearly the centre is already going from strength to strength and I’d like to congratulate all those who are making such a success of the new venture.”

Renfrew Health and Social Work Centre is a joint development between NHS Greater Glasgow and Clyde and Renfrewshire Council and local residents have also had a major hand in shaping the new Centre from the outset of planning three years ago. As a result a number of changes to the original plans have been made thanks to the contribution from members of the public. Local pupils from Renfrew High School have also played their part and came along to planning meetings and shared their views on the services that should be provided.

The Centre’s architects, Holmes, have worked closely with the CHP, Council and local community representatives to create a bright, airy welcoming space. Light floods into the building and there has been real attention to detail including the use of many natural materials.

Local artists have also created wonderful artworks for the Centre including art students from nearby Reid Kerr College.

• Renfrew Health and Social Work Centre building floor area is 5260m2, which approximately equates to the size of one standard football pitch.

• The site itself is 11,515m2 which equates to just over 2 standard football pitches

• with a large public amenity area of 3275m2 connected directly to Renfrew town centre, which is almost 3/4 of the building footprint itself.

• It has 1115m2 of glazing, making up more than a third of the external wall area.

• The building was designed to minimise its environmental footprint. Heating demand is reduced through the use of a biomass boiler plant - 'biomass' is an alternative solid fuel to conventional fossil fuels and has an impact on carbon emissions that is close to neutral.