Patients Urged Not to Reach for Pills 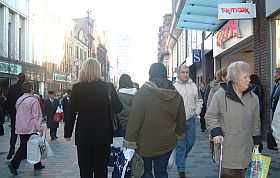 Patients throughout Greater Glasgow and Clyde are being urged to do their bit in the fight against drug resistant strains of infections – by not taking antibiotics unnecessarily.

Health Secretary Nicola Sturgeon said appropriate use of antibiotics would ensure they remained effective for years to come. She was speaking on European Antibiotic Awareness Day.

The latest statistics show fewer antibiotics are now being prescribed in Scotland and patients are reaping the rewards – with significant decreases in Clostridium difficile infections.

In 2009/10, 47,000 fewer antibiotic prescriptions were dispensed in the community compared with the previous year, reversing the previous upward trend. There was also a 20 per cent reduction in antibiotics associated with a higher risk of C.diff infection. In hospitals, new antibiotic policies have also reduced the use of these antibiotics.

“Since the introduction of our antimicrobial prescribing policy, the number of C. diff cases across Greater Glasgow and Clyde has gone down by over 50%. This is one of a range of measures that we are using in our hospitals and we are making a difference.

“We are now actively working with community pharmacists and GP’s to reduce the number of antibiotic prescriptions dispensed in the community.”

Ms Sturgeon said: “Reducing the misery caused by C.diff has been a priority for me and huge efforts have been made to reduce infections in our hospitals.

“Prudent prescribing is one area which has been addressed and there’s a clear link between the downward trend in antibiotic prescribing and reduction in C.diff infections

“Antibiotics have revolutionised medicine but we must use them appropriately to avoid problems associated with resistance and over-use and ensure that they remain effective for future generations.

“Clinicians have a key role to play but the public can also help by not always expecting to get antibiotics from their GP. Taking antibiotics unnecessarily or not following the dosage instructions can make bacteria resistant and, while we cannot stop resistance, we can stop it getting worse by using antibiotics wisely.

“Scotland has led the way in the UK by setting up a national group, with a network of local teams, to tackle antibiotic prescribing and the evidence shows this is delivering results which I expect to continue in future.”

Antibiotics are only effective against bacterial infections and provide no benefit when dealing with viruses, colds and flu.

The Scottish Antimicrobial Prescribing Group was set up by the Scottish Government in 2008 to improve the use of antibiotics and tackle the threat of antimicrobial resistance.

Health boards are working to reduce prescriptions for broad spectrum antibiotics, which are effective against a wide range of bacteria, as these are also associated with increased risk of C.diff infection and the development of resistance.

Use of recommended (narrow spectrum) antibiotics increased by five per cent in 09/10, compared with the previous year.