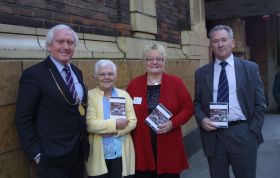 A DVD giving a moving account of a family’s struggle to cope with a relative who has dementia has been produced for carers and health professionals was launched today (Thursday, November 25) by Glasgow’s Deputy Lord Provost Bailie Allan Stewart.

NHS Greater Glasgow and Clyde (NHSGGC) has part funded the cost of the 45 minute film,“Changed Days.”

Based on a play of the same name, it was written by Alison Couston from Baldy Bane Theatre and Media Group, and commissioned by the North Dementia Forum which is made up of organisations and individuals in that area of Glasgow who work to improve the quality of care for people with dementia and their carers.

Themes throughout the play were strongly influenced by and based on families’ real experiences of dealing with the impact of dementia, for example the scene when the bus driver is unhelpful.

“The DVD is an excellent resource for people with dementia and their carers, and for staff and the general public.

“By looking at one man's experience of dementia and the effect on him and on his family, it raises awareness of the ways in which dementia can present. But it also shows how having an understanding of dementia can help, so that the overall message of the film is a positive one.

“People tend to think negatively about dementia and believe that nothing can be done to help, so this film is important in showing how the right approach (attitude and behaviours) can improve the quality of life of people with dementia and their carers.”

John P Kelly, chair of the Forum, said: “There are currently about 70,000 people with dementia in Scotland and this figure is likely to double over the next 25 years. If we assume that many people with dementia have family and friends who may also be carers, then we can see that all of us are likely to be touched at some stage in our lives.

“There is much that each of us can do to help people with dementia and their carers whether we be family, neighbours, friends or the passerby through better understanding and support.

“Health, Social Service and care staff all need to work together with the person with dementia and their carer(s) – it is a team approach.

“’Changed Days’ is all about raising awareness among everyone in society, encouraging an holistic approach and demonstrating that each of us has a social and moral responsibility to do all that we can to support people with dementia and their carers whether it be in the community or in care.”

Deputy Lord Provost Allan Stewart said: “I believe that this DVD will be a valuable educational aid to give everyone a better understand of dementia and its progressive effect on an individual.

“The everyday settings featured in the short film are based on real experiences of relatives and this makes the story deeply moving and I’m sure will leave a lasting impact on everyone who watches it.”

“Changed Days” was performed as a play 18 times at community venues around north Glasgow, including Glasgow City Chambers.

A series of booklets has already been produced by the Forum, including “Supporting People with Dementia”, a pocketbook for NHS staff.
ENDS


Notes to Editors:
The North Dementia Forum was established in 2004, bringing together a range of people from different backgrounds on a voluntary basis, including health, social work, community police, housing, voluntary organisations and carers.