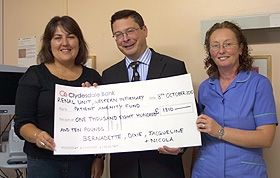 A kidney transplant patient and three friends have completed a gruelling walk 96 mile walk along the West Highland Way and raised £1800 for the Western Infirmary’s renal unit.

The marathon six-day walk earlier this year was a way of saying “thank-you” to staff at the unit from former patient Dixie Porter (36) who underwent a successful transplant at the hospital two years ago.

And now Dixie, an administrator at Oban Airport, has returned to her sporty lifestyle thanks to the transplant.

Her fellow walkers were Bernadette Carroll, a ward clerk at the unit, Bernadette’s daughter Nicola who works in administration at Gartnavel General, and her sister Jacqueline, who is a PA. Dixie and Jacqueline are friends from college days.

Dixie said: “I wasn’t sure how I would cope physically with the walk but I knew mentally I would be strong.

“The only physical affect was a friction burn on my back from my back pack!”

Dixie’s condition was picked up after she changed GP when she was 18 and went through a “health MOT.”

This included a blood test which flagged up that Dixie’s creatonin level was higher than normal.

This is waste from food and drink found in the blood which the kidneys would normally filter out.

Dixie was sent to the Western Infirmary’s renal unit where she attended as an out-patient and her health was maintained by a drugs regime and a strict diet.

This involved avoiding food high in potassium, such as bananas, coffee and chocolate.

Unusually for many people, it was not chocolate that Dixie found most difficult to avoid:

“I was a total banana addict, so this was really difficult for me!”

However the diet was not successful and she had to go onto dialysis: “In order to keep going to work I decided to have dialysis at home, which took place while I slept.

“Initially this lasted for eight hours, increasing to 14 hours. Basically I was just working, going home and onto the machine.

“I didn’t have any social life, I thought it best to keep working and keep my mind off what was happening.

“The home dialysis system worked well for me and the medical team at the Western were absolutely fantastic.

“They were just a telephone call away if I had any problems.”

Two years ago Dixie received the call she had been waiting for: “I was called on April 30 and asked to come to the Western and my transplant took place on May 1.

“It worked right away. I was in hospital for just over a week and back at work three weeks after that, I was over the moon!”

Before the dialysis Dixie went to the gym regularly and was a keen walker. Now no longer “tied to a machine” she now had the chance to “get back into a normal life.”

Bernadette said: “My sister Jacqueline and I are runners, we do a lot of 10Ks, and my daughter does a lot of running and walking.

“Both Jacqueline and Dixie were at college together and we’ve all become good friends.

“We’re now hoping to walk the next part, from Fort William to Inverness, perhaps next month.”

“It is extremely good to hear that Dixie is keeping well and healthy enough to take on such a challenging walk. I would like to thank her, Bernadette, Nicola and Jacqueline for choosing the Western renal unit as the beneficiary of their fundraising efforts.”
Ends

Notes to Editors:
The left to right is Dixie, Mr Enric Murio (the transplant surgeon who carried out Dixie’s transplant) and renal unit clerkess Bernadette Carroll.