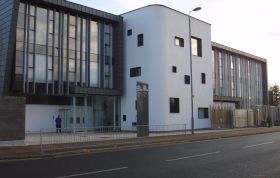 A new specially designed 6 million pound child and family centre, the first of its kind in Scotland, has been officially opened in Drumchapel.
The ceremony was carried out jointly today (Thursday 21st) by Rosslyn Crocket, Director of Nursing for NHS Greater Glasgow and Clyde (NHSGGC), and Brian Simmers, chairman of Yorkhill Children's Foundation.
A special plaque was also unveiled by Glasgow Anniesland MSP Bill Butler, commemorating the work of the late local Councillor Madge O'Neill and also acknowledging the huge contribution of Dr Stuart Laidlaw to the improved health and well being of children in Glasgow through his work to introduce the BCG vaccination and to integrate health and welfare services in the 1940s and 1950s.
Ms Crocket said: "The centre is an excellent example of partnership working to bring together under one roof a comprehensive range of children's services.

"I'm sure that families are already benefitting from the expert care of health professionals based here and that many will in the future."

Around £6million has been invested in the development of Drumchapel Child and Family Centre, which for the first time offers a “one stop shop” combination of services for families with disabled children, not only in West Glasgow, but also covering parts of East and West Dunbartonshire as well, serving a population of around a quarter of a million.

The majority of the funding has come from the Scottish Government, with the rest from West Glasgow Community Health and Care Partnership (CHCP) and funding channelled through Glasgow Community Planning Partnership. There has also been a substantial grant from the Yorkhill Children’s Foundation to take the centre from what would have been excellence to exceptional.
Mr Simmers said: “Yorkhill Children’s Foundation is delighted to have contributed to the development of this centre which we hope will be an invaluable resource for children and families who will benefit form the services it provides.”

It will be managed by West Glasgow CHCP Children’s Services, and Robert Fraser, Clinical Services Manager, Children and Young People’s Specialist Services, said:
“Not only does the Centre give us a step forward in our integrated working in children’s services, the quality of the facilities for staff, children, young people and their families is like nothing that I have ever seen before.

"I am absolutely delighted that many years of dedication and determination has culiminated in the opening of this fantastic facility.

"Tribute must be paid to the late councillor Maggie O'Neill for setting the ball rolling many years ago and also to local MP Bill Butler and the community reps for helping to get the job done.

"Thanks to them, families in the west of Glasgow and beyond now have a wide range of support services available to them under the one roof. The West Centre is a superb example of individuals and organisations working in partnership for the benefit of the community."

Unveiling the commemorative plaque to Councillor O’Neill, Mr Butler paid tribute to her commitment to the area.
He said: "I had the privilege of knowing Madge for over 20 years as a colleague and a friend.
She made a huge contribution to the regeneration of Drumchapel and of Glasgow during her 22 years as an elected council member - especially during her tenure as Convener of Housing.
"Today we honour Madge, and acknowledge her contribution as a dedicated advocate for Drumchapel and its people and as a compassionate, caring, straightforward Glaswegian.
"It was an honour to have known her."
ENDS