Christina Simply the Best in the UK! 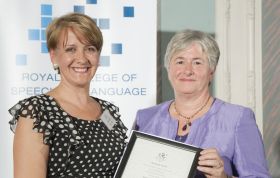 A West Dunbartonshire Speech and Language Therapy Support Worker has won this year’s UK Assistant of the Year.

Christina Crook (43) from Alexandria, a member of the speech and language therapy team at West Dunbartonshire Community Health Partnership (CHP), has received the top honour from the Royal College of Speech and Language Therapists.

A support worker for 9 years based within the Language and Communication Unit within Renton Primary, Renton, Christina impressed the judges by introducing a number of innovate practices not only to the unit but to the school as a whole to help minimise problems of social isolation of children with severe speech difficulties.
Christina, who has three children of her own, Faith (12), Annabel (10) and Claudia (7), was nominated by her colleagues Carolyn Goudie and Vicki McIntosh, Speech and Language Therapists (SLTs), who are also based at the Renton unit.

Christina said of the award: “It’s very nice to be appreciated, but I don’t think I am doing anything different from other assistants.

“I like the varied nature of the job, I work a lot on language and communication, rather than simply concentrate on speech.

“Many of the youngsters have good speech but their understanding may be fairly limited when it comes to following instructions. For example, when processing requests for information, they may only understand part of what they are being asked.

“For example, if a child is asked to put on their coat and school bag and wait for me at the door, they may only retain the last part of the instruction, such as wait at the door.

“My job is to help other people such as teachers and other staff to work with the child and use strategies to help pupils improve their communication abilities.

“You don’t have to be totally competent in signing, but it boosts the confidence of children if they know that you and their peers have some ability.

“I’m delighted to have won the award, not just for myself, but because it will put the service on the map.”

Vicki added: “Christina has always been a dedicated and enthusiastic member of the SLT team and she is particularly known for her sensitive and caring approach to very vulnerable children with speech, language and communication difficulties.”

A further sign of Christina’s commitment to her role is that she has recently completed an HNC in Speech and Language Therapy and began thinking about how to develop her own skills to work with children within the unit.

Vicki went on: “Christina, SLTs and a number of education staff from the unit attended training in the using a signing system and then taught it to a group of children to add to their own limited verbal communications skills and help them communicate with others who depended on signing.

“Christina took things a stage further by introducing a ‘sign’ of the week and then went on to introduce signing to the whole school.

“Together with the head teacher, Christina and a colleague from education began attending school assembly and introduced all mainstream and Language Unit pupils to a selection of signs.

“She and a class teacher then came up with the idea of choosing a different song each week and teaching the whole school the signs to use to accompany the lyrics.”

Mary Turnbull, chair of the Royal College of Speech and Language Therapists (RCSLT), said: "The RCSLT recognises the invaluable contribution assistants make in the delivery of services to people with communication disabilities.

“This award recognises the outstanding contribution Christina Crook has made in this capacity. In particular it recognises her commitment and innovation in engaging with vulnerable families.

“On behalf of the RCSLT I would like to congratulate Christina and thank her for her contribution to speech and language therapy and to the families with whom she has been working."
Ends