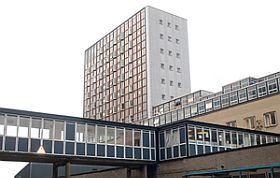 After 46 years of delivering babies and pioneering many innovations in maternity care, the Queen Mother’s Hospital at Yorkhill will close its doors on Wednesday, January 13.

During this time more than 160,000 babies were delivered at the Queen Mother’s, many of whom returned to the hospital to give birth to their own children.

The closure heralds a new era in the development of 21st century maternity services in Glasgow which has already begun with the opening of the Southern General Hospital’s state-of-the-art £28 million redeveloped unit last month.

And capacity has also been increased at the Princess Royal Maternity (PRM) following the creation of four new en-suite birthing rooms including two new birthing pools.

It is anticipated that there will be around 5500 births at the new Southern maternity, and 6800 at the PRM.

By the Spring of 2015 the new Children’s and Adult Hospitals will be fully open on the new £840million plus South Glasgow Hospitals’ Campus, creating the gold-standard of triple co-location of maternity, children’s and adult acute services on one site.

Stringent protocols developed by our expert clinicians for the intervening period until services are brought together in 2015 will ensure that mothers and babies will have immediate access to the expertise they require.

Robert Calderwood, NHS Greater Glasgow and Clyde’s Chief Executive, said of the Queen Mother’s: “In its 46 year history the Queen Mother’s Hospital has played an important part in helping to shape and develop maternity services in the city of Glasgow.

The £790,000 Queen Mother’s was opened on a phased basis, and the first baby was delivered on January 12, 1964, the day after the hospital opened, followed by 4766 other births during that first year.

HRH The Queen Mother personally suggested the new hospital’s name and she officially opened her namesake on Wednesday, September 23, 1964.

Amongst the reception committee was Professor of Obstetrics Ian Donald, who pioneered imaging based on sonar, now known as ultrasound scans.

His work was later recognised by the opening of the Ian Donald Fetal Medicine Unit in 2003.

It was described at the time as the most modern maternity hospital in Europe, with 114 beds accommodated in four wings, grouped in a mix of single rooms and four-bed units.

Research, and undergraduate and post-graduate teaching was one of the Queen Mother’s key functions, and over the years the hospital has been responsible for many innovations.

These included establishing a Neonatal Transition Paediatric Transitional care Unit in 1993, the very first breast-feeding workshop for Asian mothers in 2000 and the introduction of the first four-dimensional ‘real time’ ultrasound scanner in Scotland in 2002.

Eleanor Stenhouse, NHSGGC’s Head of Midwifery, said: “The legacy of innovation and pioneering which became a hallmark of the Queen Mother’s will continue as an integral part of our exciting new service redevelopment, which also includes significant investment in the maternity unit at the Royal Alexandra Hospital in Paisley, and the Community Midwifery Units at Inverclyde Royal Hospital and the Vale of Leven Hospital.

“Regardless of where our mums choose to deliver we can offer them the highest standards of accommodation and clinical care.”
Ends