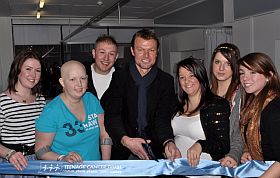 The six-bed unit for 12-16 year olds diagnosed with cancer will care for young people from across the West of Scotland and will provide a kitchen, sitting room, study, and dining area.

Teenage Cancer Trust, a charity that helps young people fight cancer, currently has a six bed facility for 16-24 year olds at the The Beatson West of Scotland Cancer Centre and will provide six beds at the new Children’s Hospital, due to be complete in 2015.

The Rangers Charity Foundation chose Teenage Cancer Trust as their national charity of the 2009/10 season. They have pledged to raise £30,000 towards facilities in both Glasgow and Edinburgh.

Speaking at the opening Arthur: said: “We are really proud to be supporting Teenage Cancer Trust and honoured that we are officially opening this unit today. I spent some time with the young people earlier and was impressed with the positive environment. This place will make a huge difference to young people with cancer.”

Ross Wallace, 16, was diagnosed with Lymphoma, he said: “Being treated on a childrens ward meant that I was surrounded by babies and cartoon characters. I felt really alone. But this new Teenage Cancer Trust unit is fantastic and is definitely more suited to young people. You don’t feel like you’re stuck in hospital because it’s more like a home from home, so you can just hang out and do normal things while you’re having your treatment. It will make such a different to young people, like me, diagnosed with cancer.”

Dr Brenda Gibson, Consultant Haematologist at the Royal Hospital for Sick Children at Yorkhill, said: "We have worked closely with the Teenage Cancer Trust to create this fantastic unit and greatly appreciate their support, and that of the Rangers Charity Foundation, which has helped create an environment where our patients can mix with their peers and enjoy a large degree of independence when they come in for their treatment.

"This unit also promotes a sense of health and wellbeing which will have a beneficial impact on the patients it serves."

Unlike an ordinary hospital ward, Teenage Cancer Trust’s new unit in Glasgow will be as close as possible to a young person’s life outside. The rooms will include vibrant wall designs and state-of-the-art technology allowing young people to keep in touch with their friends. It will boast a kitchen area, recreational space, chill out room, as well as a social area for day case treatment. Most importantly the unit will provide the opportunity for teenagers to be treated alongside other people of a similar age.

In total, the new facilities in the West of Scotland will cost the charity over £1.5 million to develop and build, all of which needs to be raised locally
For more information about Teenage Cancer Trust and how you can get involved, visit www.teenagecancertrust.org

There’s never a good time to get cancer, but for a teenager the timing seems particularly cruel. Young people can get some of the most rare and aggressive forms of cancer. The emotional upheaval of adolescence can make a cancer diagnosis even harder to cope with.

Every day in the UK, six young people will have to face that diagnosis. Teenage Cancer Trust understands that teenage cancer requires specialist care and in fact, that young people have a much better chance in their fight against cancer if they are treated by teenage cancer experts, in an environment tailored to their needs.

Teenage Cancer Trust builds units in NHS hospitals which improve the quality of life and chances of survival for young people with cancer. But as we receive no government funding, we rely on voluntary donations from people like you. It costs around £2million to build and equip a new unit.

Teenage Cancer Trust estimates that with the number of units currently around the UK, only half of the teenagers diagnosed with cancer now have access to this dedicated, specialist support. The charity’s aim is build enough units so that, by 2012, every single teenager with cancer will be treated on one.

For more information about Teenage Cancer Trust and how you can get involved, visit www.teenagecancertrust.org

Teenage Cancer Trust is a registered charity, no. SC039757