Face up to Quitting Smoking 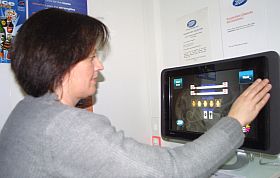 Smokers are being challenged to face up to the future thanks to a new pilot scheme introduced by NHS Greater Glasgow and Clyde’s Smokefree Services.

Using a touch screen PC programme they can create an image of themselves of how they look now and how they will look in 20 years time if they continue to smoke 20 cigarettes a day.

Two screens have been installed at branches of Boots the Chemist in Glasgow’s Central Station and Braehead Shopping Centre, and smokers looking for help and advice to quit are then referred to the pharmacy counter. These are the pharmacies selected for the national pilot of the ‘Walk in Services’ programme in NHS Greater Glasgow & Clyde.

The ‘aging machines’ are one example of a several new services which these pharmacies can offer from their busy locations and with their extended hours of opening.

The smoking cessation potential of the machines and the software was spotted by Liz Grant, NHS GGC’s Public Health Pharmacist during a visit to the Glasgow Science Centre, and she decided to modify the technology for the quit services.

Liz said: “This is a novel approach to encouraging people to quit, because for the first time they can actually look into the future and see the physical impact of smoking on their looks if they don’t stop smoking, and I think many will find this shocking.”

To begin the process the programme asks for information covering current age, ethnicity and gender, followed by the age that you would like to see yourself in the future.

A picture is taken and behind the scenes it morphs the image over the period of time chosen and they appear side by side on the screen.

Liz added: “The overall message is that smoking can age you prematurely.”

For Carol Jane Cameron (41) from East Kilbride, her picture of the future was motivation enough for her to make a second attempt to quit.

Carol Jane said: “I’ve been smoking since I was 16, latterly up to 20 cigarettes a day.
“I’d tried before the give up, using laser treatment and herbal drops, but seeing the picture showing what you are going to look like if you keep on smoking was a shock.

“The pharmacy staff are really helpful, they don’t judge you and if I need any help and support I know I can just drop in and speak to them.”

Smokers are up to four times more likely to quit with support from NHS GGC Smokefree services and in 2009 our smoking cessation teams helped an estimated 7000 people to be smoke-free four weeks after their quit date, an increase of 20 per cent on 2008’s figure of 5562.

For more information about Smokefree Services contact 0800 84 84 84 or pop into any pharmacy.
Ends

When you stop smoking, did you know that in:

20 hours carbon monoxide is removed from the body