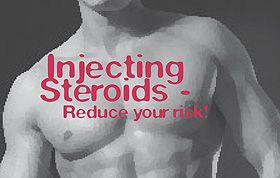 A groundbreaking clinic for steroid users has convinced around 30 per cent of people accessing its services to stop injecting.

The Steroid Drop-In Clinic is the only one of its kind in Scotland and opened in February this year as a six month pilot as part of the Turning Point needle exchange project in West Street, Glasgow.

The clinic is a joint initiative between Glasgow Addiction Services (GAS), of which NHS Greater Glasgow and Clyde is a partner, and the Glasgow Drugs Crisis Centre.

Its aim is to persuade people not to inject steroids by providing health education packs about the risks, as well as dietary and training regimes to safely gain the body image they are after.

However if users are determined to continue injecting they will be educated about how to do so safely and be given a Performance and Image Enhancing (PIEDS) Packs which include single use needles.

And out of 72 steroid injectors who used the Tuesday evening clinic during the first 10 weeks of opening, 19 - or 27 percent - decided to leave without the special needle equipment after receiving specialist advice.

“They were also identified as an at risk group from the Government’s Advisory Council on the Misuse of Drugs in the report ‘The Primary Prevention of Hepatitis C Among Injecting Drug Users.

“This group needed different information about harm reduction and they are also at risk from Hepatitis A and B and other blood borne viruses if they share or re-use injecting equipment.

“Working with the manufacturers of needle exchange equipment we came up with a specific pack for people who use Performance and Image Enhancing Drugs or PIEDs.”

She added that many in this predominantly male group were shocked when told of the health dangers:

“They are a difficult group to reach because they don’t realise the risks. This group see themselves as a particularly fit and healthy group, not what might be considered typical drug users.”

Many steroid injectors are in employment and this is why the Tuesday clinic is open between 6-10pm, to make access easier.

Gus Cunningham is the experienced needle exchange/addiction worker who runs the clinic and as well as being a power lifter, is also a Sports’ Science Honours graduate from the West of Scotland University.

He said: “Many people think that using steroids is a short cut to putting on bulk, but you still need to train and watch your diet and water intake. PIEDs are not a magic pill.

“If people resort to using steroids any bulk gained doesn’t last, once you come off the drug you lose most of the bulk gained from steroid use.

“The best way is to build up natural bulk is through a proper nutrition and exercise regime and you will keep it for the rest of your life, this is the focus of the information I provide to all clients at the PIEDs clinic.”