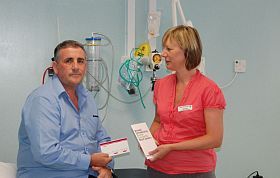 Had Glasgow man, William Tait (57), followed the advice of his buddies he wouldn’t be here today to tell his amazing story of survival.

When William and his pals received their free bowel cancer screening kit from NHS Greater Glasgow and Clyde (NHSGGC) earlier this year, his pals threw them in the bin. William didn’t. He used the kit and posted it back to the health board for analysis. And his action has quite literally saved his life!

Two weeks after sending off his sample he was contacted by the health board after laboratory scientists found signs in his sample that something may be wrong. Within a week specialists had found a cancerous tumour on William’s colon and a few weeks later, after more tests, he underwent surgery to remove the tumour.

William said: “It was such a shock to find out that I had cancer because I had no symptoms at all. I felt brand new. When the kit arrived I put it on the shelf but decided to do the test because I lost both my Mum and Dad to cancer and I just wanted to be there for my daughter and two grandchildren.

“It’s odd to think that you can have cancer and not have a clue that you’ve got it. I dread to think what would have happened had I not done the test as it would have taken some considerable time for me to get symptoms by which time it may have been too late.

“I would really urge anyone to do the test. It took five minutes and it was the best thing I ever did and who knows I might live for another 30 years!

“Everyone I’ve told about my story all plan to use the kit now so I’m really glad that something good has come from my experience.”

William was particularly lucky because his cancer was picked up so early that he do not need chemotherapy or radiotherapy. No William has had his operation he just needs to clinics regularly for monitoring.

Val Weston, Colorectal Nurse Specialist at the SGH, did the initial investigatory tests on William which identified his cancer. Since then she has seen him through his operation and his recover. She said: “William is living proof that a simple test, which takes no time at all, really can save your life. Like many cancers, bowel cancer can grow silently for a long time before you know anything is wrong. The importance of doing the test cannot therefore be underestimated.”

NHSGGC launched its bowel screening programme in March this year. More than 307,000 men and women turning 50 and over are being invited to take part in the porgramme which could potentially save nearly 140 lives in the Greater Glasgow and Clyde area.

The programme targets both sexes aged between 50 and 74 years of age by sending them an easy to use screening kit where a simple test can be carried out in private and returned to a consultant-led laboratory in a pre-paid envelope. People in this age group will be sent a kit every two years.

Dr Emilia Crighton, NHS Greater Glasgow and Clyde’s Consultant in Public Health Medicine, is in charge of the screening programme and says not everyone realises how important screening can be.

She said: “Bowel cancer is the third most common cancer in the UK and affects both men and women alike and as we get older the risk increases with nine out of 10 cases in people over 50. However, when detected early it can be treated effectively and many people can be cured – just as in William’s case.

“Within Greater Glasgow and Clyde there are approximately 750 – 830 new bowel cancer cases each year and approximately 350 – 400 deaths. It is essential that people use the kits and not be embarrassed or afraid to send us samples. The vast majority of results are perfectly normal. For the minority of people who do have positive results screening will mean early detection, quicker treatment and a greater chance of a cure.”

Assuming an uptake of 50 – 52% we anticipate that each year 1628 people will have a positive screening result, of whom 1391 will go on to have a colonoscopy and 137 will be diagnosed with bowel cancer.

Research has shown that people who are involved in active jobs or physical activity are less likely to develop bowel cancer. This is due to a number of factors: